"What About Love?" @AustinMahone tearing up the stage for our Super Bowl Blowout!! pic.twitter.com/tlYiwdiics

With talk of Justin Bieber’s deportation spreading, teen girls everywhere can rest assured that Austin Mahone will still be here to cater to their teen idol needs. The 17-year-old performed to a packed crowd on Good Morning America this morning. Here’s what you need to know about the up-and-coming pop star.

Although there is talk he’s dating the 21-year-old songstress, Mahone dispelled that rumor to People, saying,

Mistletoe – Justin-Bieber Music Video Cover -by-Austin-Mahone-with-lyricsOwned by: Music Publishing Rights Collecting Society Mistletoe – Justin Bieber music video cover by Austin Mahone with lyrics and original instrumental. @JustinBieber is my inspiration and I hope one day to meet him and maybe make a song with him. even a follow or tweet would be amazing. Produced by Darren Lawson! http://youtube.com/lawsonslyrics This…2012-01-31T23:30:36.000Z
At 15, he posted the above video, a cover of ‘Mistletoe’ by Bieber, which now has almost 2 million views. His first video post was ‘Beautiful Soul’ by Jesse McCartney.

3. His Fans Are Called ‘Mahomies’

4. He Toured with Taylor Swift

He was chosen to be the opening act for Taylor’s Red tour.
He told Z100,

I was speechless [when I got the news about touring with Taylor Swift]. It’s a huge honor to be on tour with her. She’s one of the biggest artists in the world and she’s actually one of the nicest girls in the world too. It’s incredible.

5. He Hasn’t Even Released His First Album Yet

Although he’s already wowed with hit singles like ‘What About Us’ and ‘Banga! Banga!’ there is still no album released. He told MTV,

My new album, I’m still putting it together, you know the reason why it’s taking so long is because I just want to make [sure], you know, every song on there is perfect.

With this new album, it’s kind of like a little old-school mixed with new-school, electronic dance music with Backstreet Boys melodies. It’s a different sound, but I think a lot of people are really gonna enjoy it.

Thank you to everyone who got Mmm Yeah on iTunes! You all mean the world to me and I love you so much..Thanks for tweeting too 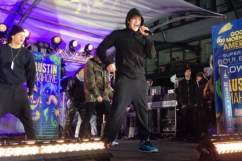