It’s time for Juan Pablo Galavis to romance us all on the new season of The Bachelor. Tune in here for live, up-to-the-minute highlights and updates in addition to some of Juan Pablo’s live tweets.

Things start off by going through highlights from the upcoming season, showing a lot of kissing, a lot of tears, but no cliffhangers. 8:03pm

Sean Lowe returns to give some funny and genuine advice to Juan Pablo. It actually seemed very open and honest. 8:15pm

And now we give a little background on the women, starting with down-to-earth Chelsie who’s learning Spanish to impress Juan Pablo. 8:21pm

Next is Renee from Sarasota, Florida. Renee is a hot-bodied surfer chick who has something important in common with Juan Pablo. She is also a single parent. 8:23pm

Andi can be quite intimidating as the camera follows her into the courtroom … She’s a criminal attorney who’s not looking forward to fighting the other girls for JP’s love. 8:24pm

Next is the massage therapist … She wants a man who wants to be rubbed by her … Need I say more? 8:26pm

The young, sweet nurse sounds a bit more realistic for Juan Pablo … but she does look even younger than she is … a lot younger. 8:26pm

Our metro area nurse Nikki on The Bachelor right now! KC fountains make a cameo!!! Rt if you're watching pic.twitter.com/r1ja4ac3VX

Lauren from Oklahoma has a big laugh and holds her family very close to her heart. She talks about how her ex-fiance broke off the engagement just six weeks before the wedding. She still has her wedding dress and the ring … 8:27pm

Yikes, watch out for that bow and arrow … Hopefully the next girl Lacy won’t be as dangerous. She actually owns her own elderly care center. Impressive. 8:28pm

And here’s Clare … She’s part Mexican and the youngest of six girls. She tells a sad story of her father dying of cancer. 8:30pm

Clare actually has a DVD her deceased father made her … She’s never watched it and she’s hoping to show it to her future husband one day. 8:31pm

And the next girl brings a gift for Camila, JP’s daughter … a cute little bracelet. 8:40pm

Nikki the nurse is next. She brings a stethoscope for Juan Pablo to hear how fast her heart is beating. 8:41pm

Kat steps out in a red dress and wants to salsa with Juan Pablo, so the two try to clumsily dance together. JP thinks she smells very good … 8:42pm

Next is Lucy Aragon, stepping out in a hippie outfit, with no shoes … yup. 8:43pm

The girl I already hate listed her profession as "free spirit." In other words, unemployable, dirty hippy. Hate her even more. #bachelor

Danielle steps out out the limo and then a girl pushes a piano up the hill instead of being in a limo. Lauren S. then plays a song for Juan Pablo, but hits a bad note and then laughs it off. Juan Pablo calls her gorgeous and the too have a speedy and awkward encounter. Juan Pablo then runs back inside because he didn’t hear Lauren introduce herself. How cute. 8:45pm

Chelsie is next in a gorgeous silver dress. 8:46pm

Valerie, who claims to be a country girl, sports some cowboy boots with her gown. 8:47pm

Elise and then Ashley each come out, but Ashley is the one with the gift. Because she’s a teacher and gives gold stars to her good students, she decides to give a gold star to JP. 8:48pm

Just a baby bump … a fake one. Next is soccer playing Alli, Amy J., and Renee. Renee was straight-forward and let JP know she has a little boy. 8:55pm

GREAT STRATEGY PRETEND TO BE PREGNATE SO EL #BACHELOR'S FIRST IMPRESSION IS "AW HELL NO" pic.twitter.com/dQXPUhdWNq

Lauren H. came next in a beautiful black, sheer dress. Maggie followed. Maggie brings Juan Pablo a fishing hook because she likes to go fishing with her family. 8:56pm

Next out of the limo is a dog named Molly … No, she’s not a contestant. She’s actually owned by Kelly the dog lover. 8:57pm

Lacy brings Juan Pablo a prescription bottle of pills that are probably candy to cure him of the headaches he’s sure to get from all the women in the house. After Lacy comes Alexis and Kylie. 8:58pm

Next out of the limo is a beautiful Canadian singer followed by Andi the attorney. 8:59pm

The girls begin to gush about Juan Pablo’s accent. 9:03pm

Juan Pablo leaves the room and returns with some music. A dance party breaks out. Then the girls start to have fun in a photo booth that’s at the house. This is definitely a first on The Bachelor. 9:07pm

Nikki the nurse gets the first one-on-one time. 9:07pm

The next one-on-one is single mom Renee who talks about her son Ben. 9:09pm

Lucy the hippie makes Juan Pablo a little nervous. He thinks she’s kind of crazy … and the viewers seem to as well. 9:10pm

The masseuse Amy J. busts out some oils to give Juan Pablo a massage on an actual massage table. It’s definitely cringe-worthy footage. 9:11pm

The ladies are scrambling, wondering who’s going to get the first impression rose. 9:18pm

Chelsie and Juan Pablo get silly in the photo booth. 9:18pm

Elise meets with Juan Pablo and talks about the passing of her mother a year ago. 9:19pm

Let's have a moment of silence for all the poor Swarovski crystals that were sacrificed for this episode. #bachelor

Do you think JP will keep Lauren H. around after she talks about her ex-fiance. 9:31pm

And Sharleen gets the first rose. 9:34pm

How awkward that Sharleen actually doesn’t feel much of a connection to Juan Pablo. 9:37pm

Clare Crawley gets the first rose at the ceremony. 9:43pm

Oops, the redhead thought JP called her when he actually called Kat. 9:47pm

Check out the Top 10 Highlights from tonight’s episode here: 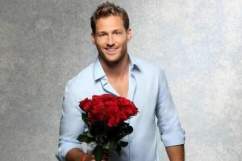