The incomparable A-list couple Beyonce and Jay-Z kicked off the 2014 Grammys with an insane performance of Beyonce’s “Drunk In Love”:

While Beyonce was the main event for the opening performance, to have Jay-Z accompany her was beyond amazing. Watch the performance above.

As lights flashed across the stage, Beyonce was revealed center stage, straddling a chair, sporting a wet, bobbed hairdo. Rocking a sexy black, caged outfit, Beyonce danced all over a chair, like a true seductress, before getting up out of the chair to shake her ass-ets.

Spreading her legs, writhing around, and touching her body in a spinning chair, she had the entire room in an uproar.

Then, of course, Beyonce moved it to the floor in her thong body suit just as hubby Jay-Z came onto the scene in a tux minus the cummerbund.

Walking hand-in-hand, the duo made their way down the stage and grinded a little with each other. Check out Twitter’s reaction below:

Beyoncé is opening the GRAMMY Awards with 'Drunk In Love'! pic.twitter.com/djbsFB2ciT

.@stylewatchmag we are sure you look amazing. It's perf for you. Loving @Beyonce's bob – you? #grammys pic.twitter.com/wfSqIPFWCA

RT if you liked Beyoncé and Jay-Z' performance #GRAMMYs pic.twitter.com/NBZjA9CRB9 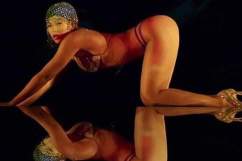 Read More
Beyonce, Celebrities, Grammys 2014, Jay-Z
Beyonce and Jay-Z opened the 2014 Grammys with a bang. Check out the video of their killer performance together here.