Charlie’s Sheen’s porn-star girlfriend took to Twitter to make a statement about the ongoing feud between Sheen and his ex-wife, Denise Richards.

The detailed letter focused on Sheen’s children that he shares with Richards, Lola and Sam.

Sheen was at odds with Richards most recently when she did not let him see his daughters for Christmas. He used Twitter to insult her.

this is as close I get to my children on Xmas? Except CJ, her mom is an angel! B, D, and DCFS go phuk urse elves c http://t.co/gFrJNr65u1

Earlier this month, he pretended to marry Rossi, alluding to their nuptials on Twitter. Soon after, in a statement to TMZ, Sheen confessed that it was all a joke just to get a rise out of his ex.

He said, “I wanted to give Denise [Richards] a stroke!” 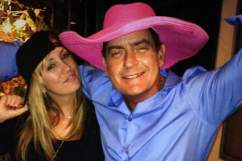