Chantel Jeffries has been identified by Gossip Cop and several other sources as the girl on the scene with Justin Bieber this morning when he was arrested for drag racing and a DUI. Read on for the facts on Jeffries, photos of her with the Biebs, and what went down this morning … 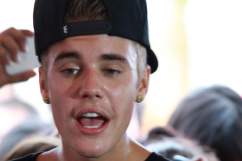 1. The Photos With Jeffries in Bieber’s Lambo Have Been Deleted

There were two photos on Justin Bieber’s Instagram account that were deleted upon his arrest. One was of him posing with rapper Khalil, who was also arrested for drag racing this morning. The other photo was a picture of Chantel Jeffries in the drivers’ seat of Bieber’s wheels. Above is the cache of Bieber’s Instagram profile.

The caption in one of the photos read:

@chanteljeffries taking me for a ride in the lambo

2. Jeffries Is a Professional Model

Currently, Chantel Jeffries works as a professional model with the Miami branch of high-end modeling agency Wilhelmina. You can check out her portfolio by clicking here. The company also has headquarters in New York and Los Angeles.

The NY Daily News reports that Jeffries is the ex-girlfriend of Eagles wide receiver DeSean Jackson. Apparently, she’s also been linked in the past to Diddy’s son Justin Combs.

4. More Photos of the Model With Bieber Have Surfaced

Before Bieber’s arrest this morning, the two were spotted driving around in his yellow Lamborghini. Take a look at the Twit pics of Jeffries and Bieber together.

We all find certain sayings or quotes as reflections of the way we feel. Jeffries particularly seems to love posting quotes all over her Twitter page. Check out a couple of her choice posts.