Main-event caliber WWE superstar CM Punk has had enough! Reports have surface alluding to Punk finally quitting the WWE for good. Here’s everything you need to know about his apparent walk-out on the WWE.

WrestlingNewsWorld.com noted that the feeling backstage at WWE called for Daniel Bryan to face off with Triple H instead due the crowd’s response at the 2014 Royal Rumble. CM Punk was then be rumored to be bumped to the 6th match placing at Wrestlemania 30 against Kane. This of course angered Punk even more, which led to him telling Vince McMahon that he was leaving.

If the rumors are true, let me be the 1st to invite @CMPunk to @IMPACTWRESTLING and get in the ring w/ me. Fans would LOVE it. Yes or no?

2. He Was Pissed Over Batista’s Win at the Royal Rumble 2014

Several wrestling sites (such as 411Mania.com) now report that Vince McMahon and Triple H are now at odds over how they should deal with the situation. Vince is reportedly open to bringing Punk back into the company, while Triple H is somewhat against that idea since he feels Punk’s leave was disrespectful. Vince McMahon will be handling the situation without HHH’s further input, though.

3. Punk’s WWE Contract is Up in July

Punk has reportedly walked away from the WWE with six months still lingering on his current contract. TMZ’s sources stated that Punk is very serious about his leave of absence from the WWE and has no plans to return anytime soon or in the future.

Dave Meltzer of the Wrestling Observer Radio stated that Punk is well off financially, though:

The thing with him is he’s very different from a lot of the guys in the sense that he saved his money, which is a big thing, and he didn’t need them, in his mind. I think that most of these guys… because a lot of these guys are frustrated, not all of them but a lot of them, but at the end of the day they don’t complain and they’re afraid to say anything. I don’t want to say he’s not afraid to say anything but he spoke his mind more than anyone else and he didn’t have a fear of being fired because if he’s fired, what’s going to happen? He’s going to have more free time and he’s going to be able to rest up his injuries, and he doesn’t have that financial concern.

4. A Recent Interview Included Some Hints Towards Punk’s WWE Discontent

Punk recently conducted an in-depth interview with MMA Fighting, which includes Punk offering up some comments on how his current run in the WWE is turning out. You can watch that interview above.

5. One Fan Gave a Report on Punk, Which Painted Him as an Unhappy WWE Employee

One fan posted the following report through ProWrestling.net. These observations from Punk’s Portland Comic Con appearance may lend some clues to how Punk was feeling about the current direction of the WWE:

I was at Punk’s Portland Comic Con and I didn’t feel the need to relay the information until he departed from WWE. There are two key parts of his Q&A that stand out in retrospect.

1. He was very upset about Batista getting the WrestleMania main event, which pretty much spoiled the Royal Rumble. He clarified he was friends with “Dave” and that “they” would not be happy, but he wanted to be honest and it was Daniel Bryan’s year. Actually, he said Bryan Danielson but corrected quickly.

2. He was very disinterested in the current product. Asked about promos he defeatedly made comments like “I show up. Someone tells me what to do and I just go out do it and leave.” He implied his recent work was not good and was down to only using two moves a match.”

Punk was very nice, engaged, and happy with his fans but in regards to wrestling and WWE he was definitely despondent and unhappy.

The video seen above features some footage of the Q&A session that Punk participated in. 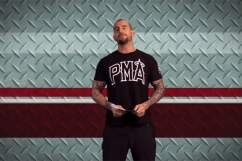