Si fans got a special treat tonight. Episode 3 of Duck Dynasty’s 5th season was all about the wisecracking younger brother of Phil. “Life of Si,” channels Si’s inner videographer. The rest of the episode deals with Willie taking his kids to a Louisiana State football game.

1. Si Watches in Awe as Jep Uses a High-Tech Camera

Si is impressed by Jep’s knowledge of technology. “That’s why it’s always good to have a techno-nerd like Jep around,” said Si. He goes on to explain that he asks his nephew every technology-related question he ever has. Si suddenly gets the idea to have people look at the world through his eyes.
“Nobody wants to see the world through Si’s eyes,” says Jase. “It’s like looking at one of those inkblots, you never really know what you’re looking at.”

2. Si Surprises the Boys With a Camera Strapped to His Head

The boys start making fun of Si as he comes into the warehouse with a mini camera attached to he forehead. Si explains that he can finally show the world who he is.
“I’ve got one camera looking at me, so you can see all my reactions to everything,” he said. When the boys ask him where he got his helmet, he brings the conversation back to his service in Vietnam. “Uncle Sam gave me this helmet and the only thing I had to do for it was go to Vietnam,” he answered.
Si ponders what it would have been like if he had the camera during Vietnam. “I would have had the greatest war movie ever,” he decided.

3. Willie Gets Tickets to an LSU Football Game

Willie surprises his children with tickets to a football game. He is extra excited about the “family outing” because the popular games are always sold out. His kids don’t seem to share in the excitement. When they say they were going to just watch with friends, Willie responds, “They’ll be really excited when they see you on TV at the game,” he said.

4. The Kids Warn Willie Not to Embarrass Them

John Luke and Sadie don’t seem too enthusiastic about the sporting event. They are sure to warn their dad not to wear his LSU furry tiger hat. In preparation for their road trip, Willie asks his wife Korie to find his LSU bean, cheese, and dip combination tray.

The kids are getting restless in the traffic, so their dad tries to keep their spirits up. Willie starts talking about the tailgate, specifically the cheese. “I like to get to the games before they take the hot cheese for the nachos away,” said Willie.
“Gotta stay positive and keep thinking of that hot nacho cheese,” he continued.

Si and his nephews Jep and Jase are in the woods prepared to hunt. Si has other plans and keeps talking about his video. “This whole Si and the camera, it’s getting out of hand,” laments Jase.

7. Si Decides He Wants to Make a War Movie Instead

Realizing a documentary is boring, he changes his video’s angle.
“I know I said it was gonna be a documentary about my life, now it’s turning into a war movie,” Si revealed. The boys burst out laughing and remind their uncle that they came with the sole purpose of hunting deer.

Through my eyes hey, it's an epic war movie. – Si #DuckDynasty

8. Willie, Sadie, and John Luke Finally Pull Over to Have Their Own Tailgate

For his kids’ sake, Willie tries to keep calm as the voice on the phone keeps saying, “recalculating.”
“There’s no bigger buzz kill than being lost in the middle of nowhere,” said Willie. Sadie suggests stopping and cooking their own food. “I have to show my kids that when life gives you lemons, you make lemonade,” Willie said.
The three finally have their own party, and listen to the game’s 4th quarter on the car radio.

9. Kay Wants to Give Her Dogs Middle Names

It’s towards the end of the episode that we first see Phil and his wife, Kay. Kay poses the question to her husband of why dogs don’t have middle names like people do. Phil seems to be uninterested in the conversation, and the couple quickly gets interrupted by Si’s antics as usual.

10. Si Wants to Name His Documentary, ‘For Your Eyes Only’

Si explains his movie concept to Phil and Kay. Questioning who filmed it and wrote the script, Phil doesn’t seem amused. Jase breaks the news to Si that the name of his movie is actually from a James Bond film, but Si isn’t discouraged in the least.
“This is shaping up to be an instant classic,” said Si. 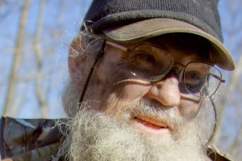