The boys are playing around in the warehouse, determined to pull their usual all-nighter. Willie, their boss, ruins everything by joining them. Back at Phil and Kay’s house, a sleepover is going on with the grandkids.

What happens when you need a big order to go out the next day? You pull an all nighter of course! See it tonight on @DuckDynastyAE

1. Willie Is the Party Police

Willie comes into the warehouse to find the guys making goat sounds. He’s nervous that the big Duck Commander order will not go out on time. Si, Jase, Jep, Martin assure him that they have everything under control.
“Its called time management,” said Si.

Mia is the daughter of Jase and Missy. Priscilla is the daughter of Jep and Jessica.
Phil comes in to Miss Kay polishing the girls’ nails. He warns them that it’s dangerous. “I’m getting out of here ladies before my brain melts,” said Phil. The girls beg to stay and tell him he’s the best hunter and has the greatest beard, and Phil quickly caves. Part of their sleepover involved whip creaming Phil’s hand as he sleeps.

3. The Boys Talk About MacGyver and Willie Interrupts

The guys are eating and reminiscing about the show. Willie comes in to get in on the fun.

"Everyone knows MacGyver was the ultimate redneck.” – Si pic.twitter.com/gg5ToNUaJ3

He tells the boys he wants to join in on the all-nighter. The boys, especially Jase, aren’t happy.

“It just starts to get a little weird, when someone is trying so hard.” @JaseDuckman #DuckDynasty

4. Si Is Getting His Pixie Fix

Si reveals that he’s had four pixie cocktails to stay awake. The boys can’t understand how he still has his teeth.

5. Willie Realizes the All-Nighter Isn’t Fun and the Boys Painted Eyebrows on Him While He Slept

Since Willie was not up to the challenge of the all-nighter and feel asleep early, the boys played a trick on him. Using permanent marker, they drew eyebrows on his face. 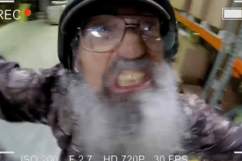