Like his character in The Hangover trilogy, Justin Bartha is a newly married man. After a long-term relationship with Ashley Olsen, Bartha has settled down with Lia Smith. Here is what you need to know about the personal trainer Bartha met during a Pilates session at Equinox in L.A.

This is a Neuromuscular Warm-Up instructional Smith taped for Equinox. In the article accompanying the video on their website, Equinox describes Smith as a “master trainer.”

2. She Made a Workout Tape With Reggie Bush

In the video, the pair sneak into an empty Miami Dolphins’ Sun Life Stadium at night. They go through a rigorous training session together. The clip, which includes lots of pushing, pulling, squatting, lunging, rotating and bending, went viral.
Bush isn’t the only celeb the couple associates with. In November, this moment was captured at a San Antonio Spurs Vs New York Knicks Game. In the photo, the happy couple is sandwiched between a seemingly-unamused David and singer Nelly.

The first time the couple was photographed together was last New Year’s Day during their Hawaiian vacation. They also decided to get married on Oahu, where Smith’s parents live.

According to US Weekly, Smith was pregnant at the ceremony. An eyewitness told the magazine that she had her hand on her stomach and looked as though she had a bump under her gown.

5. They Had an Intimate Ceremony With Celebrity Guests

Reese Witherspoon and her husband, Jim Toth, who is Bartha’s agent, Jesse Eisenberg and Hangover costar Ken Jeong were all there to celebrate. 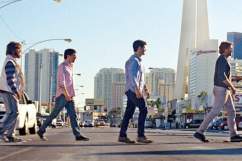