The Insane Clown Posse and the ACLU have formed one of the more unlikely duets of the year as the two groups join forces to sue the FBI over the feds’ classification of Juggalos as a “gang,” reports The New York Times.

In 2011, the FBI listed Juggalos — the term for the band’s fans — in its annual National Gang Assessment, based on several isolated incidents.

1. Four of the Band’s Fans Are Also Listed as Plaintiffs

Four Juggalos, from North Carolina, Iowa, Nevada and California, have joined their heroes in the suit. They claim that police have unfairly targeted them for punishment due to their copying of ICP’s outlandish clown make-up style. The lawsuit reads:

Among the supporters of almost any group — whether it be a band, sports team, university, political organization or religion — there will be some people who violate the law. However, it is wrong to designate the entire group of supporters as a criminal gang based on the acts of a few. Unfortunately, that is exactly what happened here.

The band’s two members, Violent J and Shaggy 2 Dope, are listed on the documents by their real names, Joseph Bruce and Joseph Utsler. Both are natives of Michigan.

2. One Plaintiff Was Refused From the Army Due to His ‘Gang Tattoos’

One of ICP’s fans, Scott Gandy from Concord, North Carolina, says in legal documents that his application to the Army was denied because of his Juggalo tattoos. Gandy says that the recruiter told him that his tats were “gang-related.” After undergoing a painful, expensive procedure to have them removed, his application was still refused.

3. Another Active Military Member Believes He Will Be Discharged

Robert Hellin, of Garner, Iowa, is a corporal in the Army. He says that due to his tattoos and fandom of the Insane Clown Posse he faces “imminent danger of suffering discipline or an involuntary discharge from the Army.”

According to Mr. 2 Dope and Mr. J, in 2012 they were forced to cancel a show at the Royal Oak Music Theater in Michigan. Local police told them to cancel due to their fan’s designation as a gang.

5. Ultimately the Band Is Standing Up for Fans and Music

Whatever you think about the ICP and Juggalos, it’s pretty cool that they’re going to this length to clear the name of their fans. They’ve been here before, too. In 2012, they filed suit against the feds looking for the documents that the FBI used to determine their fans were a gang. The FBI pretty much just ignored it. In the new lawsuit, the band members state they are not nearly the worst example of the their genre:

[Other hip-hop artists] uses very harsh language to tell nightmarelike stories with an underlying message that horrible things happen to people who choose evil over good, [ICP] offershopeful, life-affirming themes about the wonders of life and the support that Juggalos give to one another. 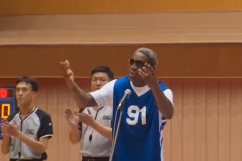