The youngest son of Phil and Kay Robertson, Jep, 35, may be the baby of the family but he still holds his own at the family company, Duck Commander. In his teenage years, he admits to having struggled with drugs and alcohol, but has since turned his life around. He and his wife, Jessica, have four children, and many fans of Duck Dynasty want to emulate their fairytale marriage.

Here’s what you should know about Jules Jeptha Robertson.

Yeah, I'm a momma's boy!! It's cool when your mom is one of the most awesome people on the planet!! pic.twitter.com/NznPnmrfmQ

Besides having a special closeness with his mother, he’s also committed to his dad, Phil.
After Phil made controversial comments on homosexuality to GQ magazine, he stood by him.

In December, after the controversy, Cracker Barrel Old Country Store pulled some Duck Dynasty-related items from their shelves. The same day the store announced this, Variety reported, Jep was at a fundraiser for Duck Dash, a 5K run to benefit Shriners Hospitals for Children. Jep always represents the family at this charity event, starting the race and handing out awards.
At December’s race, he decided to look at the bright side of the controversy.
According to accessAtlanta, his statement to the crowd was,

We’ve had kind of a crazy week back home. We’ve gotten a lot of support. We really appreciate it.

He already has 4 little ones: Lily, Merritt, Priscilla, and River. Even with the responsibilities of his family and job, he still has time for proper hair maintenance. According to US Weekly, Jep shampoos, conditions, and blow-drys his beard.
The clan also added a new member to their family, a dog, Gizmo.

3. He Had a Drug and Alcohol Problem

When he was 18, he met a group of friends that turned him onto drugs.
“I pretty much did anything that was put in front of me. I remember smoking a joint that was dipped in formaldehyde,” he told iamsecond.com.

He explained in the same interview how it all came to a head for him.
One night he got drunk and came home to find a note his brother, Willie, left a note on his truck. It said, “I know what you’ve been up to. We need to talk.’

The next day, at eight in the morning, he went over to Phil’s house. He didn’t realize his family was there, staging an intervention.

All my brothers trucks are there. I’m thinking, ‘What are they all doing there?’ And they’re all sitting around, on the couch, looking at me. My heart starts beating out of my chest, and my dad said, ‘Son, are you ready to change?’

That very day he vowed to change his lifestyle with his family’s help.

My brothers, they were all crying. And at one point, we just got them in the middle of the room and just all got down on our knees and just cried and just prayed to God, just ‘Thank you for getting me out of this because I am done living the way I’ve been living. And I remember my dad saying, ‘My prodigal son has returned.’

4. He Met His Wife Jessica at the Hair Dresser & They’re Planning a Fashion Line

The couple met in February of 2001 and were married by October of that same year. In a blog she wrote for A&E, his wife Jessica said she first saw her future husband at their mutual hair stylist, where they just simply said, “hello,” to each other. A week later, they ran into each other at concert, and after that, started hanging out.

Jessica dished to People that a new clothing line is in the works.

Currently, they are partnering with the fashion label Corello to raise money for St. Jude Children’s Research Hospital. Jessica said,

Jep and I have met so many children that either are currently being treated or were treated at St. Jude. We all get so busy and sometimes we need a reminder to slow down and think of those in need

Fans seem to be responding to the couple’s committed, loving relationship.

@JessicaDuckWife & @JepDuckman are so down to earth and sweet. Cutest couple in the world. Love you two.

5. He Works at Duck Commander

Jep joins his three older brothers, working in the family business as their cameraman and editor. The family has a DVD series, Duckmen, that Jase worked on. In the above photo, he is cutting wood to make a duck call. Duck Commander has become a lucrative empire by fabricating top-of-the-line duck calls and decoys out of swamp wood. They’ve also expanded into products such as hunting apparel, cooking products, DVDs, CDs, and novelty items. 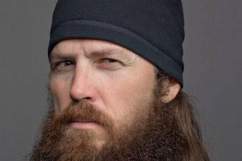