Jonah Hill is SNL‘s host tonight, with musical guest Bastille. For his opening monologue, Jonah Hill came out dressed in a suit, very clean cut. He starts off by talking about his current award nominations and is interrupted by a “fan” from the audience who wants to know what it’s like to work with Leonardo DiCaprio. Then, he’s interrupted again by an audience member who wants to know about Leonardo DiCaprio’s hair. Then, a guy who’s supposed to be Brad Pitt asks about Leo as well.

Jonah Hill becomes angry that no one cares about him and they just care about Leonardo DiCaprio, so he begins to trash talk Leo … While Hill is running his mouth, Leonardo DiCaprio surprises viewers, appearing onstage to confront Hill about all the smack he was talking. DiCaprio is insulted, saying he was there to support Hill and had been watching from backstage. Hill tries to cover up his actions, but DiCaprio sees right through it … Hill soon comes clean and DiCaprio gives Hill a little talk about how he shouldn’t try to be a “big shot”.

Then, Jonah Hill asks Leonardo DiCaprio to do the only thing that makes him feel safe … which happens to be mimicking Kate Winslet in Titanic with Leo right behind him. 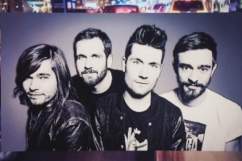