UPDATE: Lil Za has been arrested for drug possession at Justin Bieber’s house during the raid. Cocaine was involved. A press conference is about to be held with the L.A. County Sheriff to discuss the goings-on. It will begin at noon PST. Story developing … 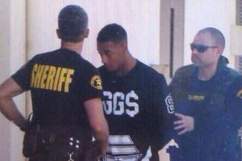 Police were sent to the Biebs’ house (11 cars to be exact) with a felony search warrant in connection with Bieber’s egg assault on his neighbor. According to TMZ, deputies are looking for anything that can link Bieber to the egg-throwing incident. Check out some of the video footage below:

With over $20,000 in damage done to his neighbor’s house, this has become a felony and Bieber may do jail time if found guilty.

Outside @JustinBieber's house right now! It's goin' down! Sh*t is goin' down! @TMZ http://t.co/BhSxfO43Aq pic.twitter.com/NnVA2kRqnl

Currently, police are looking for eggs, any footage, or anything else that may link Bieber to the crime. Considering they already have the video the neighbor recorded, they may not need much to take Bieber away. 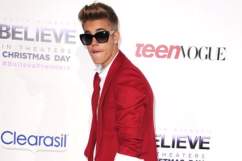 Los Angeles County Sheriff’s Department says the purpose of the search warrant at Justin Bieber’s home is to seek video surveillance or other possible evidence in the vandalism incident that occurred on January 9, 2014.

After the past year of Bieber getting away with different legal issues, the police are determined to nail him. It’s no secret that Bieber has been linked to marijuana a lot in the past year, so let’s cross our fingers that the police don’t find any drugs in Bieber’s lair. If they do, the Biebs is screwed.

Presently, Justin Bieber is being detained, along with 7 other people according to the LA Times, in his garage as the police search the premises. Have a look at Bieber’s home, that police are swarming in the below Twit pics:

Is it a hotel? No! Is it a shopping center? No! Its Justin Bieber's house! pic.twitter.com/dI8Dumv3Qe

Another video has been made available of the scene:

Read More
Celebrities, Justin Bieber, Twitter
Justin Bieber's house is currently being searched by police in a massive raid. The Biebs has been detained ... Read on for details.