The 25-year-old singer/songwriter made her debut at the Grammys this year. She was nominated for four awards, tying with Taylor Swift for the most nominations for a country singer.
The breakout musician won two awards this evening, including Best Country Album, impressively beating out Taylor Swift.

I never thought I would want someone to win over Taylor Swift but I really wanted Kacey Musgraves to win Best Country Album. Sorry T.

She also took home the prize for Country Song of the Year.

1. This Was Her First Time at the Grammys & She Won 2 Awards

Her first major label debut album, Same Trailer Different Park, came out in 2013.
She’s best known for her single, ‘Merry Go ‘Round.’ At the 2014 Grammys, that song won for Best Country Song.
She explained to radio.com how she and her co-writers came up with the idea for the award-winning song.

“A deeper meaning came to life whenever we started really tossing the idea around. We’re all from small towns so we all can relate that way. It’s just a special song about life in general and the patterns that you get into. I feel like it’s something everyone can relate to.”

Even though she has a boyfriend, her date for the big night was her mother.


2. Her Boyfriend Is in Her Band

Musgraves’ boyfriend, Misa Arriaga, actually plays in her band. When she heard she garnered multiple Grammy nods, she had just returned from a Mexican vacation with him.
She told radio station K102 about the morning she found out she was a Grammy contender. She said, “I was really hungover. I was laying in my bed and I knew that nominations were coming out but I didn’t really know what to expect or whatever.

The pair sang “Are You Lonesome Tonight” at the Grand Ole Opry in 2013 shown below.

3. At the Grammys She Performed ‘Follow Your Arrow’ Which Tackles Both Gay and Straight Love

At the Grammys, she performed her powerful song ‘Follow Your Arrow,’ wearing light-up boots in true country fashion. The song’s lyrics can be controversial to some.

Kiss lots of boys
Or kiss lots of girls
If that’s something you’re into
When the straight and narrow
Gets a little too straight
Roll up a joint, or don’t

The starlet shared her hope for the song with the Boot, saying,

More than anything, even if they don’t agree with the girls kissing girls thing or even the drug reference, I would hope that they would agree that no matter what, we all should be able to love who we want to love and live how we want to live.

In an interview with radio.com, she confessed this song is very close to her heart, saying,
“I think the song ‘Follow Your Arrow’ is the most me as far as where my brain is at or where my mindset is at about life and people in general,”

The new Grammy winner will travel around the country for Katy Perry’s Prism tour, which kicks off in June of 2014.
Last year, she dished to Rolling Stone about her co writing with Perry.

Writing with her was amazing. She’s undeniably a huge pop star, but there’s incredible substance and wit there, too.

During the Grammys, Katy, known for her fun outfits, was sure to tweet a shout-out to her colleague’s fashion sense.

I'm so happy @KaceyMusgraves is going on tour with me. I want a pair of my own light up boots!

5. At the CMAs, She Famously Made a Face When Miranda Lambert Won

During that ceremony, Musgraves caused a stir when Miranda Lambert won for Female Vocalist of the Year. The camera showed Musgraves looking quite disappointed. When E!Online asked her about it, she simply responded, “Sometimes my face just looks that way and it doesn’t really mean anything.”
Musgraves took home an award that night for Best New Artist. 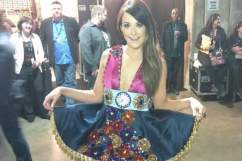