Katy Perry — The PRISMATIC WORLD TOUR 2014To launch her North American Tour, Katy asked fans on Instagram to tell her about their #PrismaticCity. This is what they had to say! Citi Pre-Sale begins 1/21/14 at 10:00a local time – citiprivatepass.com. Facebook Pre-Sale begins 1/23/14. Details for Facebook pre-sale and the general on sale will be announced soon. More tour info available…2014-01-15T19:04:41.000Z

Katy Perry just announced her Prismatic World Tour for 2014, which will hit 46 cities in North America, starting June 22, 2014. She also has some musical friends accompanying her on her tour … I’ll give you a hint … Capital Cities, Kacey Musgraves, and Tegan and Sara. 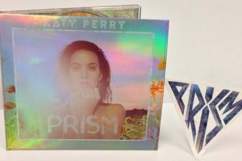 Read More
Celebrities, Celebrity Tweets, Celebrity Twitter, Katy Perry, Twitter
Katy Perry has announced her Prismatic World Tour 2014 in a video for fans. Check out the video here and see who will be performing with her on tour.