This year, you saw her accompanying her husband to the State of the Union in January, and making a cameo in the film God Is Not Dead.

1. She Has Five Kids

While three of Korie and Willie’s children are biological, two are not. Willie Jr. was adopted at five weeks old. Speaking at the Congressional Coalition on Adoption Institute’s Angels in Adoption Gala in Washington, D.C, Korie said,

From the moment we found out about [Will], he was ours. I swear, I had labor pains the night before I went and picked him up at the foster home he was living at. He’s our child, just like our biological children.

Rebecca was a Taiwanese exchange student who stayed with the family 10 years ago. The couple fell in love with her and took her in as a foster daughter.

2. She Met Her Husband Willie At Camp Ch-Yo-Ca

Watch the interview with the couple on Jimmy Kimmel. They dish on everything from meeting President Obama to the first time Korie met her future father-in-law, Phil.

Korie wrote a piece for Guideposts, where she said that her future mother-in-law, Miss Kay, was the camp cook that summer and her boys went for free.

They started dating senior year of high school and when they got married, Willie was 19, and Korie was 18.
Korie, formerly Korie Howard, revealed to A&E that she dated Willie less than a year before they got married.

She wrote in Guideposts that her family was not so supportive of her decision to marry at first.

When we first decided to get married, my parents weren’t thrilled. They were afraid I would drop out of school, start having kids and never go to college. Then they saw how committed we were. They supported us all the way—something that runs in both our families.

Korie is very open about her strong religious beliefs and acknowledges God in her life. When speaking about her family’s success, she is sure to mention her faith.

We are more successful than we ever dreamed. But if it all disappeared tomorrow we would be okay, because we would still have our faith in God. It’s what allows us to forgive each other, love each other and listen to each other.

In fact, Korie says that it was her faith that led her to adopt Willie Jr. She wrote in Guideposts,

I’d always been inspired by the verse that says true religion is to look after orphans and widows in their distress (James 1:27)

4. She Opened a Boutique with Her Daughter Rebecca

5. She Went to Harding University With Willie

She graduated with a degree in art education.
In Guideposts, Korie talked about the odd jobs her husband had to work at to make ends meet.

In our young married days, with both of us going to college, he did tons of extra jobs: working at a bowling alley, as a janitor for a real-estate agency, in an ice-cream plant (he hated being in the freezer all day). 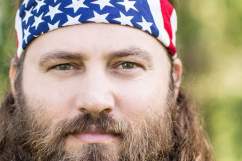