Macklemore and Madonna teamed up to dominate the 2014 Grammys with a duet performance of Macklemore’s song “Same Love.” Announcing Macklemore and Ryan Lewis’ performance was Queen Latifah, talking about how this is a song for everyone. It’s a song about equality in love for all.

In the middle of Macklemore’s performance, Queen Latifah officiated the marriages of 33 gay and straight couples scattered throughout the audience.

Shortly after, Madonna came out on stage dressed in all white singing “Open Your Heart to Me.” Katy Perry caught a bouquet and people were visibly emotional in the crowd, particularly Keith Urban, who had tears in his eyes.

After the Grammys, Queen Latifah mentioned that two of the couples who were married are friends of hers.

See the best photos of Madonna and Macklemore at the Grammys here: 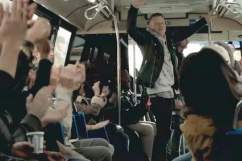 Read More
Celebrities, Grammys 2014, LGBT, Macklemore, Madonna, Twitter
Macklemore teamed up with icon Madonna for a performance of the song "Same Love" at the 2014 Grammys. Check out the amazing duet and the mid-performance marriage of 33 gay and straight couples.