Tonight, Miley Cyrus gave her hometown of Nashville a big salute, making her cowgirl roots the theme for her episode of MTV Unplugged. With the help of fellow tongue-wagger Madonna, Miley performed a mash-up of her song “We Can’t Stop” and Madonna’s “Don’t Tell Me.”

So, how did it all go down? Miley started off by putting on a white cowboy hat and began to sing Madonna’s “Don’t Tell Me.” Then, Madonna appeared sitting in the audience and joined in the fun. After Madonna makes her way to the stage, she starts grinding on Miley, which was a little awkward, but not as crazy as when Miley started spanking the icon. Oh, and of course, the two ended their performance with more grinding and some tongue action …

Clearly, this duet was a dream for Miley, who Time Entertainment caught telling the audience:

That was pretty fucking cool, you guys. It’s pretty cool performing with Madonna. It’s a great day. There’s nothing I can complain about. Well, I can’t be stoned when I perform – that’s a little something to complain about.

And, as a cute tribute to their performance, Miley posted the above Instagram photo with this as a caption:

M &M ! Don”t ever Tell us We Can’t STOP! #revolutionoflove

Stay tuned for the performance video. 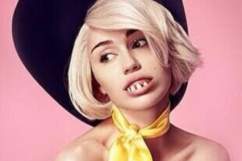 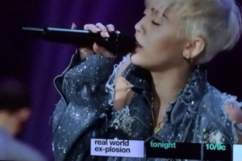 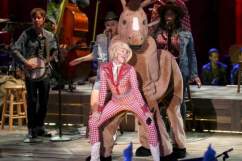