In a tweet today that has since been taken down, One Direction’s Liam Payne gave a shout-out to Willie Robertson, of Duck Dynasty.
This was the message:
“huge love to you/your family huge respect for your business prosperities and the family values you still all behold. big fan.”

The seemingly simple quote was taken as an insult by some. They found it to mean that Liam supports the homophobic comments the patriarch of the show, Phil Robertson, made back in December in GQ magazine.
Phil said,

Everything is blurred on what’s right and what’s wrong. Sin becomes fine. Start with homosexual behavior and just morph out from there. Bestiality, sleeping around with this woman and that woman and that woman and those men. Don’t be deceived. Neither the adulterers, the idolaters, the male prostitutes, the homosexual offenders, the greedy, the drunkards, the slanderers, the swindlers — they won’t inherit the kingdom of God. Don’t deceive yourself. It’s not right.

One Direction fan and openly-gay YouTube star Tyler Oakley was shocked by Liam’s tweet. Once a huge supporter of the band, he’s interviewed them and was invited along to take part in 1D Day.

Wow. Very confused and disappointed by this @Real_Liam_Payne tweet. This literally changes everything… pic.twitter.com/aQajQdJhfQ

One Directions fans turned on Oakley, going so far as sending him death threats. He replied to those in a mature tweet:

I live for the ignorance in my replies right now. I've never seen so many tweens telling me to kill myself and to leave the fandom. Amazing.

Liam must have realized the repercussions of his words.
After the backlash, he tweeted this:

Being a fan of someones show and the way they still hold a family together doesnt mean i am ok with all they say.

Some people didn’t buy his apology.

But publicly endorsing it implies u are :/ MT @Real_Liam_Payne: Being a fan of someone's show doesnt mean i am ok with all they say

Liam Payne needs to realise that his tweet came across extremely homophobic.. I love Tyler Oakley <3

According to Entertainment Weekly, the first two episodes of Duck Dynasty had lower viewership than its previous two premieres. Although it had 8.5 million viewers, this number is 28 percent less than its season debut in August. 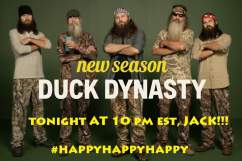