It was previously announced that the dynamic rap/hip-hop duo of Big Boi and Andre 3000 (better known as Outkast) are set to hit the festival stage in 2014. This news comes just in time for the group’s 20th anniversary.

Now fans have some more official Outkast reunion news to get excited about — Big Boi and Andre 3000 will be performing at several festival concert gatherings with over 40 planned dates.

The official Outkast Facebook fan page posted the following update for fans to clamor and speculate over:

Outkast will return to the stage with a full festival run of over 40 dates to celebrate 20 years since Southernplayalisticadillacmuzik! “Returning to the stage together is the most exciting way for us to thank everyone for their 20 years of supporting Outkast.” – Andre 3000. “I’m looking forward to rocking the stage with my Bro Ski and to all the fans – stank you smelly much, this is for y’all!” – Big Boi. Stay tuned for dates! #Outkast20 – Team Outkast.

For a preview at just how incredible Outkast is in a live environment, check out their on-stage rendition of Ms. Jackson at the 2000 edition of the World AIDS Day concert.

Three separate tour dates have been formally announced thus far. When the rest become public, we’ll make sure to list them all here: 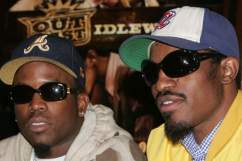 Outkast Reunites for Coachella 2014: Andre 3000 and Big Boi are Back