Alright tweeps… I did not enter into this lightly, but I entered into it fully… with love. #grammys #qlshow pic.twitter.com/BDPYfUCg85

Not only was it the Grammy Awards tonight, but it was a moment in history. Live at the 2014 Grammys tonight, Queen Latifah officiated 33 gay marriages on television and she did an awesome job.

After The Grammys, Queen Latifah told the press that two of the couples are actually personal friends of hers.

Stay tuned for the video. 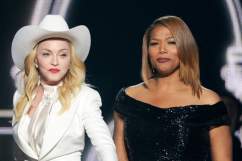