Sandra Bullock won the award for Best Actress in an Action Movie on Thursday night at the 2014 Critics’ Choice Awards. When accepting her award for the film Gravity from Marlon Wayans, she started to give a comical speech, thanking George Clooney for floating away and never coming back. Then, all of a sudden, there was a loud interruption of an announcer’s voice for a split second. With that, Bullock responded with, “What the f*ck?!”

Thanks, Sandra Bullock for the f-bomb! Now, a CW show is gonna make it on @TMZ. Sweet. #CriticsChoice

She carried on her speech joking that people basically shouldn’t interrupt someone accepting an award for an action film. It was pretty hilarious. Watch the clip above. 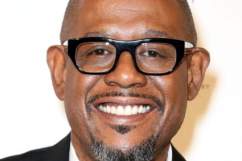