Twenty-two-year-old Shailene Woodley has made a name for herself with moving television and movie roles. In her newest film, The Fault in Our Stars, she plays a teenage cancer patient. Watch the trailer above.

Here’s what you need to know about this non-typical young actress.

1. She Made Her Film Debut in ‘The Descendants’

In 2012, Shailene won an Independent Spirit Award for playing George Clooney’s sarcastic teenage daughter in Alexander Payne’s The Descendants. In Interview magazine, she said that both men have become like family to her:

…both George and Alexander have become like big brothers or wise friends. They’ve given me advice not only on the industry, but also on my personal life. Getting that movie was really one of those moments where the stars aligned.

2. She’s Best Known for Her Role on ‘The Secret Life of an American Teenager’

Many know Shailene through her role as teen-mom Amy Juergens on the ABC Family series. The show ran for five years, ending in June. In that mature role, she took on themes such as young motherhood, unplanned pregnancy, and teenage sex.

Before winning that role at 15, Shailene had plans to possibly attend NYU and study interior design. She told Interview magazine:

I’d always wanted to be an actor, but I didn’t see it as being my number-one career. I’d always thought of acting as a side job. But then I read the script for Secret Life and was really drawn to the idea.

3. She Plays a Cancer Patient in ‘The Fault in Our Stars’

In the upcoming summer film, she plays Hazel Grace Lancaster, who falls in love with a boy, played by Ansel Elgort, whom she met at a cancer support group. The movie is based on the young adult novel by John Green.

She told the New York Times Magazine that she likes to play complex characters:

I mean, for me, I’m all about truth in life. I think truth is the biggest, most important thing to focus on, whether it’s acting or in our own personal lives. When I go to a movie theater, I want to be affected, and the way that I’m affected is by truth. So for coming-of-age films, I wanted to — in every situation — accurately depict these people as authentic human beings, and not as some sort of made-up, materialized stereotype.

Living the life of a child actress, her parents gave her certain rules to stay grounded. She told the New York Times:

I had three rules growing up. I had to stay the person they knew I was, have fun and do good in school. And as long as I did all of those, then I could continue to act.

She didn’t take on big roles as a youngster because she prioritized school, she told Interview magazine:

Well, I’d been acting since I was 5, but I’d never wanted to do a series because I always wanted to be able to go to public school.

5. She’s Playing the Lead in the Highly Anticipated ‘Divergent’ Series

“It's been a long time since I have been able to trust anyone.” #Divergent pic.twitter.com/rE0mVIqXCk

The bestselling teen trilogy was made into a film with Shailene in the lead. The movie will be released on March 21, but already has fans of Veronica Roth’s books abuzz.

In an interview with Woodley and Theo James, who plays Four, Collider asked her what it felt like to play a book heroine, she answered:

…I think that if I thought about that I might go insane. It’s funny because it’s based on the book but the movie that we’re making is a lot different from the book in a lot of ways. So there seems to be a bridge or gap between the two. It’s hard to associate between the fanbase; everyone is stressing about that but I don’t pay any attention to it. 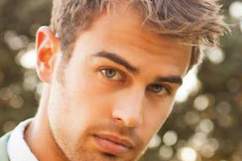 Theo James of ‘Divergent’: 5 Fast Facts You Need to Know