Tori Spelling and Jenni Garth are co-stars again! Their new comedy Mystery Girls has been picked up by ABC Family.

The pals and fellow 90210 alums are reuniting to produce and star in the show. The premise involves two former detective TV actresses who are reunited for a real-life mystery.

TVLine.com had this to say about the plot:

The project follows a former starlet named Charlie Contour (Garth), a suburban housewife and mom, who is roped into solving crimes with her former mystery TV show co-star Holly Hamilton (Spelling) when a witness to a crime — and a huge fan of their former show — will only speak to the infamous Mystery Girls.

Production starts soon and the finished product will be on air later this year.

Hello, Twitterverse! We can’t wait to bring you all the #MysteryGirls fun in 2014 with @JennieGarth and @ToriandDean!

Both actresses started their careers together playing privileged teens in the long-running TV drama, Beverly Hills, 90210, from 1990 until 2000. 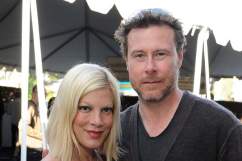