The newest trailer to 22 Jump Street was released last night. Its boasts an adorably funny alternative ending that has fans pumped for it’s release on June 13th.

As we already know from the end of 21 Jump Street, police officers Jenko and Schmidt, played by Channing Tatum and Jonah Hill, are sent off to college.

Hilarity ensues at the pair try to fit into campus life.

It’s about to go down. #22JS #22JumpStreet pic.twitter.com/WYEx14ZgWC

Slash Film had this to say about the newest (and third) trailer.

Tatum’s voice at the end slayed me. I might be at the moment with 22 Jump Street where I’m done watching trailers, as several of the jokes have already been ruined. I’m already totally sold, what about you?

Fans of the first film cannot wait for the highly-anticipated sequel, and have taken to Twitter to show their excitement.

Rarely a fan of sequels but couldn't be happier that 22 Jump Street is happening!

Can 22 Jump Street just hurry up 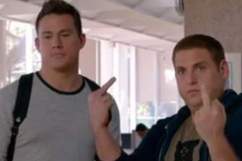