The Red Hot Chili Peppers won seven Grammy awards and sold 60 million albums worldwide in their long career. Singer Anthony Kiedis has been with the band from the beginning — when the boys were just high school friends in L.A. Here’s what you need to know about the 51-year-old who is still rocking out after all these years and ready to take the stage at today’s Super Bowl.

1. His Father Introduced Him to Drugs at Age 4

In his memoir, he reveals that his father, John, blew pot smoke in his face when he was only 4 years old.

The young singer snorted heroin and shot cocaine at his father’s home before he turned 15.
He told Rolling Stone,

The first time I smoked pot, I was with my dad, and to me, it just seemed like I’d landed in this magical kingdom where anything was possible. I got stoned, and my father had a girl over at the house, and she didn’t have her shirt on. I said to myself, you know, “How lucky could a boy be?” At the time, I thought I was the luckiest kid on the block.

The rampant drug use caught up with him. In 2008, the Daily News reported that he was a frequent patient at L.A.’s Cedars-Sinai, battling kidney disease.

Anthony Kiedis makes an appearance in Point Break tonight at #VandAwaterfront. Make sure you buy your tickets asap. pic.twitter.com/wuRe5QiepT

According to NME, he played a “gun-toting surf dude” Tone in Point Break. His imdb page also includes The Chase, with Charlie Sheen.

In 2008, the organization bestowed this honor on Kiedis, saying,

The votes have been counted, and the results are in. It’s official—pop princess Leona Lewis and red hot chili pepper Anthony Kiedis are the sexiest vegetarian celebrities alive!

The famous vegan told Maxim about his food choices.

I’m not a true vegan. I dabble in sustainable fish and dawdle in the consumption of eggs. Steak doesn’t speak to me, and tempeh is so-so. I’ll savor a solitary apricot that’s been kissed by my baby.

4. He Named His Son Everly Bear After the Everly Brothers

People reported that his unique name choice paid homage to another musical act.

We had a long list of names, but I suppose it came to me by way of the Everly Brothers, which is one of my favorite bands.

The mama came up with Bear. That made sense to me because he’s from me and I feel like I’m part of the bear clan, and I think it’s nice to have a little bit of earth in your name.

5. He Wrote a Memoir ‘Scar Tissue’ That’s Being Put on TV

In 2004, Kiedis penned his bestselling autobiography, naming it after his band’s song of the same name, which won the 2000 Grammy for Best Rock Song.

The song opens with these lyrics:

‘Sarcastic Mr. Know-it-all’ is Dave Navarro, who was the guitarist for the band in the ’90s.

Whether he’s recollecting the influence of the beautiful, strong women who have been his muses, or retracing a journey that has included appearances as diverse as a performance before half a million people at Woodstock or an audience of one at the humble compound of the exiled Dalai Lama, Kiedis shares a compelling story about the price of success and excess. 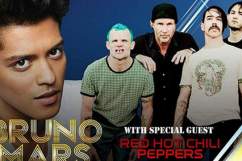 Read More
Anthony Kiedis, Bruno Mars, Celebrities, Red Hot Chili Peppers, Superbowl
Singer Anthony Kiedis and his band, performing with Bruno Mars, are about to heat up Met Life Stadium at the Super Bowl. Here's a look back at his life and career.