The opening performers at the 2014 BRIT Awards were the awesome band Arctic Monkeys. With an “A” and “M” flaming in fluorescent yellow, the band gave a sexy performance singing their hit “R U Mine?”

Enjoy another clip from the performance in the above tweet.

It's Arctic Monkeys singing about the icky stuff. They're quite good at that, you know? #BRITs2014 pic.twitter.com/GHvRyMXU4T 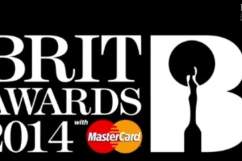