Tonight is Valentine’s Day on The Big Bang Theory, and the gang’s all celebrating in their own ways. As is usually the case, not everything runs smoothly in the lovable nerds’ romantic escapades.

Here’s what’s in store on “The Locomotive Manipulation.”

1. There’s a Road Trip to Napa

Amy and Sheldon, along with Howard and Bernadette, decide on a couples’ getaway to the wine oasis.

Of course, Sheldon and Amy have separate rooms at the bed and breakfast they are staying at.

The two couples ask Penny and Leonard to join in on all the alcoholic fun.

2. Leonard Says That Penny Has a Drinking Problem

Leonard and Penny attempt to hang out alone… #BigBangTheory pic.twitter.com/GVNSPxlrWU

This prompts Leonard to quickly respond, “I’m not sure it’s such a great idea to take Penny to where wine comes from.” Penny, who happens to have a glass of red wine in her hand, doesn’t look amused.

Leonard makes matters worse by saying, “Come on, we bust on each other! I wear dorky glasses, you might have a problem—it’s all for laughs.” Luckily for Leonard, the sedated Penny responds with, “That’d really piss me off if I didn’t have a buzz going on.

Besides the four in Napa, Raj has decided to leave town to avoid the pain of the holiday. This gives Penny and Leonard an opportunity to have much-needed alone time without the gang barging in.

The only stipulation is that they have to dog sit for Raj’s beloved pet, Cinammon.

4. Penny & Leonard Spend the Holiday at the Vet

While Leonard and Penny are making the most out of their time together, Cinammon devours an entire box of chocolate.

The dog’s plight really kills the romantic mood, and the couple spends the night in the veterinarian’s office.

The doctor, played by Switched at Birth’s Tania Raymonde, seems to return the sentiment.

Could this be a new love interest for the perpetually single astrophysicist?

In a shocking plot twist, Sheldon plants a kiss on Amy…and he seems to like it.
Fans of “Shamy” rock the Twittersphere.

To anyone who watches The Big Bang Theory, Sheldon just kissed Amy… Worlds are colliding… 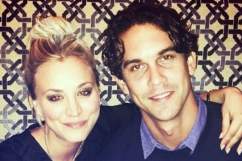