Bria Kelly is definitely a girl to watch on season 6 of The Voice. Have a look at some of her amazing performances in addition to all the facts on the girl with “THE Voice.”

1. Bria Kelly Won Over the Judges on The Voice Within Seconds

On the season 6 premiere of The Voice, Bria Kelly made judges Adam Levine and Blake Shelton turn around in their chairs during her very first note. Soon after, the other judges joined Levine and Shelton. It was Kelly’s rendition of James Taylor’s “Steamroller Blues” that impressed the judges as well as the viewers. She was the showstopper of the night.

Ladies and gentlemen, we have just heard THE Voice. 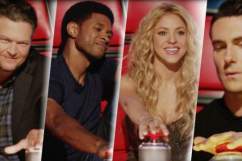 2. America’s Got Talent Had Kelly as a Semi-Finalist

Bria Kelly appeared on the seventh season of America’s Got Talent and made it all the way to the semi-finals. The Examiner wrote:

Kelly easily made it to the semifinals, where she was declared by Howard Stern to be the strongest singer of the competition, but ultimately lost in total votes to a brutal combination of William Close and America’s infamous stupidity (IE: Tom Cotter and Todd Oliver).

3. Kelly Has Performed “The National Anthem” Over 40 Times

Bria Kelly has been performing since she was 11 years old and has performed “The National Anthem” over 40 times. Her Facebook profile gives a lot of detail on her patriotic performances:

Bria began her career in 2007 by singing our National Anthem for the Norfolk Admirals. She sang for the Admirals many times, and also for other local and regional sports teams, the Air Force and Navy, and for local law enforcement and veterans’ organizations. In 2007, at age 11, she won the Philadelphia Eagles’ National Anthem competition, and performed the Anthem for 45,000 Eagles & Jets fans at an NFL football game in Philadelphia. She has also performed the Anthem for the Washington Redskins and Baltimore Orioles … Bria was the first official performer of Nashville’s CMA Music Fest 2010 by singing the Anthem there.

Kelly apparently found her love for singing when she was just 8 years old, performing in her elementary school chorus.

4. She Has Opened for a Ton A-List Performers

Bria Kelly is an experienced performer and has been the lead singer in several bands. According to her bio from America’s Got Talent, she’s been the opening act for many big stars.

Performing solo, or as part of a duet or band, she has opened for country acts such as Craig Morgan, Miranda Lambert, Darius Rucker, Little Big Town, Rodney Atkins, and The Carter Twins. Bria also enjoys getting out and playing music solo or as part of a duet, acoustically. Anywhere there is an audience, a sound system, and at least one guitar nearby, Bria loves to be there.

5. Bria Kelly Has Won Many Contests and Awards for her Singing

Her general manager is her father Bob Kelly.

Read More
Bria Kelly, Facebook, The Voice, TV, Twitter, Youtube
Bria Kelly from 'The Voice' is has accomplished so much in her career already. Take a look at some of her videos, photos and all the details about Bria.