Carly Rae Jepsen is most known for her music, but she’s also been seen in tons of ads for the brand Candie’s as she’s been their spokesperson for 2013. So, first a music artist, then a model, and soon she will also be known as a Broadway star … Check out the 5 Fast Facts on Jepsen’s latest career moves, how she got started, and more.

1. Jepsen Is Making Her Broadway Debut as “Cinderella”

Carly Rae Jepsen has joined the cast of “Rodgers & Hammerstein’s Cinderella” on Broadway in the starring role of Cinderella herself and her first show is tonight! Have a look at some of the behind-the-scenes footage in the below video:

2. Fran Drescher Will Also Be Joining the “Cinderella” Show as Jepsen’s Wicked Step-Mother

A big warm Cinderella welcome to @carlyraejepsen and @frandrescher. Their performances start tonight!

That’s right. Jepsen isn’t the only star joining the “Cinderella” cast. Fran Drescher, who many of us remember from The Nanny, has also become a new member of the show.

Trying on the wig! As my character says" this is the day that everything changes!" pic.twitter.com/9IvDvt9amN

Though Drescher plays the horrible Madame, trying to stop Jepsen’s character Cinderella from finding true love, the two stars get along very well when they aren’t playing enemies on stage.

3. Jepsen’s First Hit Song Has Probably Gotten Stuck In Your Head At One Time Or Another

"Hey, I just met you, and this is crazy, but here's my number, so call me, maybe?" -Carly Rae Jepsen (Call Me Maybe) #SQ

In 2011, Jepsen released the well-known hit “Call Me Maybe” and the song spread like wild fire. After its success, Justin Bieber referred Jepsen to his manager Scooter Braun, who then signed Jepsen to his label. Wikipedia states that:

The single reached the number one spot on both the US Billboard and Canadian Hot 100, while also topping the charts in 19 other countries.

4. Before Jepsen Was Famous She Auditioned on a Canadian Talent Show

It wasn’t American Idol and it wasn’t The Voice, but Jepsen did test out her pipes on a talent show called Canadian Idol in Vancouver, Canada. Jepsen competed in their fifth season and even made it all the way into the Top 8 on the show. Check out the video of her audition above.

While we’re on the subject on embarrassing moments on television, how about when Carly Rae Jepsen threw the worst first pitch ever? The poor thing … 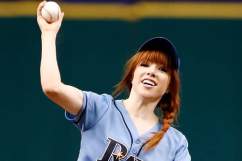 5. Jepsen and Adam Young of Owl City Have Been Sued for Copyright Infringement

You may or may not have heard the song “Good Time” by Carly Rae Jepsen and Owl City. If you haven’t, you can check it out in the above music video. In any event, the two music artists have been sued by singer-songwriter Ally Burnett over alleged copyright infringement, as reported by TMZ. Burnett claims that “Good Time” was taken from her song “Ah, It’s A Love Song.” TMZ reports:

There’s been no ruling in the case yet, but publishing company BMI has reached an agreement with Ally … placing $804,156 — royalties from “Good Time” — in escrow. In return Ally agreed to drop her suit against the company. That chunk o’ change will sit in the account until the case is resolved.

Personally, I think the two songs sound very different … What do you think?