Dakota Johnson is a daughter of Hollywood royalty who is rapidly making her own name in the industry.

Her biggest break came recently when she landed a coveted role in the Fifty Shades of Grey movie.

The 24-year-old Johnson will play Anastasia Steele in the story of a virginal college student who begins her sexual exploration with billionaire Christian Grey.

Here’s what you should know about Johnson and why she’s perfect for this steamy role.

The woman cast in the adventurous role definitely had to be able to deal with the explicit sex scenes. Johnson assures us that she is the woman for the job.

She told Elle, “I don’t have any problem doing anything. The secret is I have no shame.”

The starlet also respected the author of the hit trilogy, E.L. James. She told Entertainment Weekly :

I think it’s an incredible love story and that’s why it’s affected so many people. Erica (EL James) did a really good job of explaining how that just can happen sometimes and you have this chemical pull to someone. Adding in the sex makes it perfect. Sometimes you feel a little bit naughty and that’s okay.

2. She Has Famous Parents

Johnson is the daughter of Melanie Griffith and Don Johnson, who were married for six months in 1976, remarried in 1989, and stayed together for seven more years.

Griffith tweeted her pride when her daughter was cast in the iconic role.

My beautiful child Dakota has been chosen to play Anna Steele in 50 Shades!!! Look out world! Here she comes!!! #proudmama

She told Elle about being young and having famous parents:

I think people, especially the press, like to pick on children of famous people and I think that’s fucking awful. Things get made up. It’s so, so sad. And there’s absolutely nothing you can do about it as a 16-year-old. You’re like, ‘Why? What did I do?’

She dished to Interview magazine that having famous parents is somewhat boring:

It’s not necessarily annoying. I’ve come to understand the allure of that to other people, how it seems so interesting and different. But for me it’s just my family, it’s the way I grew up and it’s my mom and my dad. It doesn’t really bother me because I get it, but sometimes it’s kind of a drag to talk about.

Johnson was cast first and then her leading man was chosen. But shortly after Sons of Anarchy’s Charlie Hunnam signed on, the British actor abruptly left the production. Us Weekly reported that a source said he was never completely on board:

Charlie Hunnam was never going to do Fifty Shades of Grey. He told his agents from the beginning he didn’t want to do it and was going to pull out.

Meanwhile, with millions of passionate Grey fans scrutinizing the casting, there was even a petition on change.org to have Matt Bomer and Alexis Bledel plays the leads.

Finally, the role of Christian Grey was filled by Irish actor Jamie Dornan.

4. She Has an Actor Boyfriend

The only person Johnson told she had tried out for the role of Anastasia was her boyfriend, Jordan Masterson.

Johnson has been spotted having lunch with her boyfriend on set, reports The Daily Mail.

best known for his role in The 40-Year-Old Virgin, Jordan is the younger half-brother of actors Danny and Christopher Masterson.

5. She Played Opposite Justin Timberlake in ‘The Social Network’

In the 2010 Facebook movie, Johnson’s character slept with Sean Parker, the founder of Napster portrayed by Justin Timberlake.

In The Five-Year Engagement, she played the nymphomaniac girlfriend of Jason Segel. Is there a pattern forming here? 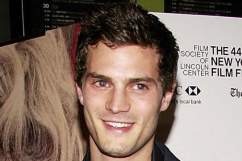