Actor Philip Seymour Hoffman has been found dead of an apparent drug overdose. He was 46. Hoffman, who won the Academy Award for Best Actor in 2005, was reportedly found dead by a man named David Katz. Here is what we know so far about this developing story.

Police outside NYC home of Philip Seymour Hoffman reportedly found dead at the age of 46 via @GMA pic.twitter.com/bOOVEQT2kG

David Katz reportedly found Hoffman with a needle in his arm around 11:15 a.m on Sunday, February 2. He called 911 shortly thereafter.

2. David Katz Is a Playwright/Screenwriter

Official: Philip Seymour Hoffman was in the apartment alone & had been collaborating w/ screenwriter David Katz, who found him & called 911.

Katz has been referred to as both a screenwriter and a playwright in reports following Hoffman’s death. His screenwriting credits include two John Leguizamo movies: “The Pest” and “Freak.”

3. Katz Came Looking for Hoffman After the Actor Missed an Appointment

Philip Seymour Hoffman last seen Sat. night. Playwright and friend David Katz found him Sun. after he failed to show up to get his kids.

According to the Wall Street Journal, Katz went to check on Hoffman after the actor missed an appointment to pick up his children on Sunday morning.

The Daily Mail reports that Hoffman’s partner (and mother to his three children) Mimi O’Donnell phoned Katz, who was a mutual friend. According to the Independent, when Katz could not reach Hoffman by phone, he went to the actor’s West Village apartment. It was there that Katz discovered Hoffman’s body.

4. David Katz and Hoffman Were Working on a Project Together

The Huffington Post notes that Hoffman and Katz were working on a project together. Details about the project are scarce, but it appears that Katz and Hoffman previously collaborated on a play called “Oh The Power” at the LAByrinth Theater Company in 2010 (Hoffman directed.) Katz’s Wikipedia page also notes that Hoffman directed a Katz play called “Ask/Tell” at The Bank Street Theater.

Hoffman and Katz can be seen together in this Facebook photo, which was taken at the opening night gala for the LAByrinth Theater Company’s production of “Sunset Baby” in the fall of 2013. You can listen to an audio interview with Katz in the SoundCloud file above.

5. Katz and Hoffman Were Good Friends

The footage above shows the exterior of Hoffman’s NY home earlier today. Katz spoke with the New York Times, which reported that Katz was the one to make the 911 call. When asked about Hoffman, Katz told reporters:

“I saw him last week, and he was clean and sober, his old self. I really thought this chapter was over.”

Katz and Hoffman had been friends for years. In a 2008 article about Hoffman, the New York Times wrote that “Hoffman stamped out his cigarette and gave [Katz] a bear hug” right before Katz’s play “Philip Roth in Khartoum” began. 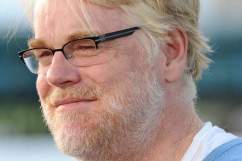 R.I.P. Philip Seymour Hoffman: All the Photos You Need to See