Frank is getting seriously grilled about his relationship to Chinese interests. Where is Doug Stamper going to wind up in all of this? To make matters all the more interesting, Remy is stirring the pot. But….

BESIDES THAT, HOW WAS THE PLAY MRS. LINCOLN??

1. Frank Makes Out With Meechum

You know how you say sometimes about TV show, “Well I saw that coming a mile off”? Not. This. Time. After Claire gets a little tipsy at home, the Underwoods’ bodyguard, Meechum, joins her for a drink when his shift ends. He had cut himself on some glass earlier and needs his bandage changed just as Frank arrives home. As the vice president tends to his wounds, the sexual tension between Claire and Meechum becomes unbearable and she starts to kiss him, in front of Frank. Okay, a little creepy, but we know they don’t have a totally normal marriage so whatever. But then Meechum and Frank start making out and the three get busy together. The following morning, Frank says hi to his bodyguard as if nothing happened. Classic Underwooding.

2. The President Is Feeling the Heat

Frank can’t stop fidgeting. Even the president notices. It leaves Frank telling Walker that he buried his class ring. Claire tells Frank she knows he’s scared when he admits he’ll tell the truth to the prosecutor. When the prosecution shows Frank a photo of Doug at the casino, it’s the first time we’ve truly seen our anti-hero frazzled. Frank turns the investigation into the administration on its head by offering up his travel logs to prosecutors. Which means they (the prosecution) discover the president has been in marriage counseling, something Frank wants, because if the prez feels weak, he’ll lean more on his vice. Classic Underwooding.

Doug is honest about his feelings for Rachel at an AA meeting. Frank’s fixer also gets himself a sponsor, despite having been sober for 14 years, a gentleman by the name of Fitz. Toward the end of the episode, Doug goes to see Rachel, but finds her having sex with a girl. The girl is another runaway type with no one to turn to. Doug seems dejected. I would too — he seems like the only one in this episode who isn’t gettin’ any.

Megan returns to give an interview to talk about General McGuinness and says that Jackie Sharp is turning against her country by not supporting the bill. Later, though, we find out that Megan has been doped up to the gills the whole time.

5. Is Remy Crawling Back to Frank?

Remy tries to half-assedly dig into Jackie Sharp for Tusk. It’s tougher still for Remy because he’s out of work. He has a pretty cool scene with Frank in a church where Remy says it’s over between him and Jackie, not that Frank, or anybody watching, believes him. 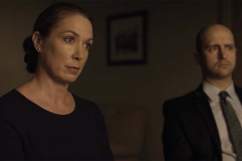