Welcome back to House of Cards, where we delve into the twisted political plots of Congressman Frank Underwood. Where we last left him, at the end of Season 1, Frank was about to be tapped as vice president after a long and convoluted plan that left one congressman dead and a few ambitious reporters very, very suspicious. WARNING: There are huge spoilers in this review.

Without further adieu, here are the top five highlights and spoilers from Season 2, Episode 1 of House of Cards:

Season 2 begins exactly where Season 1 left of, with Frank and Claire on an evening jog while Doug tries to put out the first of Zoe’s investigation into Rachel, Peter Russo and Frank’s political maneuvering.

The first task Doug and Frank need to undertake in order to cover up their trails is to spirit Rachel, the former prostitute, away from Washington and Zoe and her band of journalists. After a tense confrontation, during which Rachel draws a knife, Doug convinces her to leave town to avoid the press and any retribution should she confess to anything.

Last season ended with Gillian, the crusading former employee of Claire’s nonprofit, suing Claire in order to embarrass her. She should know not to mess with an Underwood.

Claire looks up every doctor who served in Africa because, you know, she can do that. She somehow narrows it down to which one is Gillian’s already-married baby-daddy and calls his wife. Gillian gets an unhappy surprise when the wife shows up to confront her.

As if that wasn’t low enough, Claire goes as far as to cancel the poor pregnant lady’s medical insurance so that she can’t get her meds or hospital treatment. Claire even hits a new low when she says, “I’m willing to let that child wither and die inside of you,” while she tries to get Gillian to end the lawsuit.

3. Zoe Gets Closer to the Truth About Russo’s Death

With the help of some police sources, Zoe and her new reporter-boyfriend uncover the curious fact that Russo was in the passenger seat of his car during his “suicide” by asphyxiation in his apartment building’s garage.

When Zoe suggests to Frank that Congressman Russo may have been murdered, by him, Frank tosses Zoe onto the track in front of an incoming metro train. The moment seems utterly surreal and almost a convincing dream sequence until you realize, “Wait, that actually just happened.”

Well, there she goes. One of House of Cards’ main characters have gone in the way of so many HBO leads, with a tragic and untimely demise when the audience least expected it. Oh well, it looks like we’ll just have to rely on our other two bumbling reporters to uncover Frank’s ruthless climb toward the top. 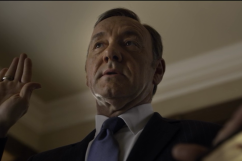 Read More
House of Cards, Netflix, TV
You've waited over a year, now here are the top highlights and spoilers of the Season 2 premiere.