The president is not happy with Frank, our anti-hero is in exile. He’s not the only with troubles either because Claire is busy making sacrifices too. Tusk has to answer some difficult questions when his Chinese business partner comes in from the cold.

1. The President Finally Sees Through Frank

The president and Frank have an awesome opening scene where Walker appears to finally see his vice president for what he is. Calling Frank out for forcing the handing over of travel logs which turned the prosecutors on to the marriage counselling. Also, Floyd Mayweather gets an odd mention, and he doesn’t even appear. Netflix doesn’t have enough money for Money. Later in the episode, the president admits that the first lady was prescribed meds during their counselling.

2. The Charges Against Lucas Are Back

The McPoyle brother gets arrested and tells the arresting officers that he’s got access to AT&T’s date centers. NSA stuff going down right now. He’s able to show an FBI agent the power he wields, and in exchange for not wielding it, he wants Lucas freed.

3. Fang Comes in From the Cold

Fang, the Chinese link between Tusk and the money laundering, confirms to prosecutors that there was a money laundering scheme involving the casino. He admits that the gambling money was used to launder foreign donations. Tusk gets asked about it in a deposition, where he pleads the fifth.

Tusk also finds out that Remy and Frank have been meeting through Seth. By far the most uninteresting story in this season, it’s not even getting its own number.

Fang comes to the U.S. to testify for the prosecution where he’s granted immunity and status in the U.S. Will he sellout Tusk? The Chinese money-launderers presence in the U.S. also serves to heighten tensions between the U.S. and China in another of the show’s very boring subplots.

4. Claire and Jackie Come Together

Claire caves to Jackie and agrees to stop her bill. It all comes to a head when Jackie Pearl Harbors Megan live on MSNBC’s All In. Just one of a number of media cameos in this season, I’m not sure if it adds to the realness.

Anyway, Claire and Jackie come together to help Frank plan his impeachment of the president. Claire tells Jackie, “it’s only the beginning.” Silly Claire, it’s the second-to-last episode.

Rachel ends her relationship with her new ladyfriend, Lisa. Doug makes it his business to run into the new friend at a gas station. He goes back to her and Rachel’s place where makes it clear their relationship has to end. Not really sure why Rachel thinks she has to, the viewer knows that Doug is only doing it because he wants Rachel. 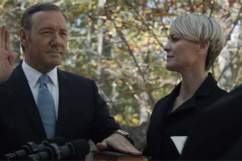