With Frank locked in a room for most of episode 4, the show gave us a real treat by awarding its viewers with a Claire-centric show. Now, the show goes on with Frank’s political wheelings and dealings as it continues to attempt at developing some sort of drama between Frank, China, and Tusk.

Here’s what you need to know about season 2, episode 5:

Feng’s character is introduced with a strange three way riddled with odd fetishes that he then pays $10,000 for. According to Doug’s briefing, he is a Chinese billionaire who has come to the United States for some serious negotiations about trade between the US and China.

As soon as Fang’s out of earshot, Frank naturally plans on doing the exact opposite as what they agreed in order to destabilize the economy in China. We can already tell this is going to antagonize the show’s home-grown billionaire, Tusk.

After Claire’s lie on national television that her sexual assault, rather than career ambitions, led to her abortion, potential political opponents predictable head to the small-town clinic to see if the story, and the doctor, check out. The guy turns out to be a “friend” of the family, hopefully trying to gain employment as their new public relations guy, but you know how it goes in house of cards, it takes at least 3 episodes to learn a characters’ true motives.

3. The Hacktivist Storyline Gets Wonky

I get it, House of Cards, I get it. In a post-Snowden world where hacktivists are in the news for collaborating with the FBI to entrap their friends, this storyline makes sense. It seems, however, that the original point of this story arch, Lucas hacking Frank Underwood to prove he’s a murderer, has been lost to an odd barrage of hamsters and red wine.

The problem is, without Zoe, Lucas isn’t even that compelling a character on his own. So now that we have Gavin and the FBI guy branching off of the storyline, the whole thing feels cumbersome.

4. Claire Takes on the Army Over Sexual Assault

While we’re on the topic of current news stories that have made their way into House of Cards, Claire is using her newly-found platform as an activist for women’s rights, along with a friendship with the First Lady, to meet with a bunch of military stiffs and confront them, face-to-face, about how dated the Army’s sexual assault policy is.

Every once in awhile, the show runners need to remind us that Frank is still just a normal guy. They usually give us this by having some odd thing catch him off guard in hopes that we see a glimpse of honest reflection. That comes in this episode when Frank meets a Civil War reactor posing as his great-great-great-grandfather.

Frank is great a handling any situation, but part of the show’s allure is that he always seems to be the underdog. Now that he’s squaring off against two billionaires, the show echoes what Fang said about Frank’s Civil War ancestor, “he fought for the loosing side.” 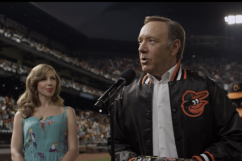 Read More
House of Cards, Netflix, TV
Here are the top highlights and spoilers of the season 2, episode 5 (aka Chapter 18).