The Francis Underwood-Raymond Tusk political drama continues to unfold. Here’s what happened in season 2, episode 8 of House of Cards.

The press is after the Underwoods after Claire’s infidelity is printed in the tabloids. Claire gets in touch with Adam try to play damage control. She convinces Adam to deny everything and destroy all the photographic evidence of their affair. Adam appears on television and does as Claire asked of him. Frank and Claire give a press release and blindside Adam. They tell the press that they commissioned Adam to take the photo of Claire sleeping at their house. Adam can’t believe that they are lying, especially because he denied everything. Adam is upset that Claire lied to him. Claire convinces him that the reason why she lied is because if they both had the same story, the press would think the story wasn’t too clean. Remy comes and intervenes with a new threat for Adam against his fiancee’s father. Adam releases a photo of Claire in the shower.

Freddy meets with his principle investor interested in starting a chain restaurant based off his ribs recipe. Freddy goes and speaks to his estranged son, an ex-con. He informs him about his potential restaurant contract, and how he wants to make it right by his family by getting them involved. Freddy’s son comes around and shows up to work at his BBQ restaurant.

The slew of tabloids directed at Frank continue. A new one is that his favorite restaurant, Freddy’s, is owned by ex-con who kill two senior citizens. Meanwhile, Frank and Claire hire a model that looks like Claire to claim that she was the model in the shower photograph by Adam, not Claire. Press starts to show up at Freddy’s now, too. His son pulls a gun on a press agent. Cameras click.

4. Adam Meets With the Underwoods

Adam comes clean that he had to release the new photograph of Claire because his fiancee’s father is a human rights activist and he has been arrested in Bogota. Remy could influence his death. Claire informs Adam to do as she says, fix it, or she will take him out. Adam follows through.

Because of his son pulling a gun on a reporter, Freddy’s business is ruined and he loses the restaurant. 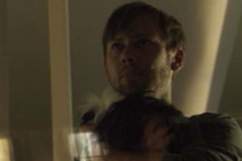