We've got our Dawson(s)! Excited to have #TheNotebook's James Marsden and Luke Bracey join our adaptation of #TheBestofMe!

James Marsden, who has taken on roles in musicals, historical pieces, and Disney movies, is adding another novel adaptation to his resume.

Nicholas Sparks, known for his prolific romantic novels, which are adapted so perfectly on film, has announced that James Marsden was cast in The Best of Me.

The 40-year-old former model, known for his charming smile and handsome face, shies away from leading-man roles.

Here’s what you need to know about the actor whose looks and character have made him a true Hollywood star.

1. This Is His Second Sparks Adaptation

In the highly successful adaptation of Sparks’ The Notebook, Marsden plays the handsome fiance of Rachel McAdams’ character.

In an interview with OUT magazine, he admitted that he thought the movie would fail:

I thought The Notebook was going to be a schmaltzy Movie of the Week–type thing, and here we are!

In the same interview, Marsden also claimed he does not like playing leading men:

I’d rather play a goofball or a rube than a steamy leading-man role. I’ve never been that guy — I was a skinny loner in high school.

2. Marsden Is Replacing Paul Walker in ‘Best of Me’

Back in January, Deadline reported that Walker was originally cast as the leading man in the romantic drama. After Walker’s death, the director looked to replace him, and decided between Marsden and Magic Mike’s Joe Manganiello.

Marsden will star opposite Michelle Monaghan. The pair will play high school sweethearts who reunite in their hometown after 20 years.

3. He Had a Child With a Model Soon After Getting Divorced

In December, the bachelor welcome a baby boy with Brazilian model Rose Costa, only a few months after getting divorced.

The NY Post reported that Costa cheated on her boyfriend with Marsden. She needed to renew her visa and flew to Brazil with a two-day layover in Miami. Marsden happened to be in Miami at the same time, and the two spent the night together.

Mardsen was married to actress Lisa Linde, who filed for divorce in September 2011 after 11 years of marriage. With Linde, he has two children.

Marsden showed off his vocals in Hairspray. In the above clip, as Corny Collins, he belts out, “It’s Hairspray.”

He told Box Office Mojo about the excitement he felt on that set every day.

I would finish a day on Hairspray and I wouldn’t want to go home. I would want to stay there and watch the numbers that I wasn’t [appearing] in. I know it sounds cheesy but it was a real labor of love.

About.com reported that at a press conference, when asked about about his future in musicals, he replied,

They were just completely different than anything I’ve ever done before and, like I said, singing has always been a hobby of mine. To be able to do it in an acting job was a lot of fun. Both of them were fun. I would do it again for sure.

After Hairspray, he sang in Disney’s Enchanted, playing the prince to Amy Adams’ princess.

In the period piece that chronicled a butler’s life in The White House under different presidencies, Marsden was given the honor of portraying John F. Kennedy.
He told Esquire what it felt like to take on that role.

It’s pretty special… and terrifying. But also one of the things I’m proudest to have been a part of. There are a million great performances in the film and to to play someone as iconic as John F. Kennedy, I just didn’t want to mess it up.

Born and raised in Oklahoma, the actor wanted to be sure he had Kennedy’s Boston accent down.
In the same interview, he added,

More than anything I wanted to make sure I nailed that accent. I didn’t want to sound like an impersonator or a caricature of someone so historically significant. 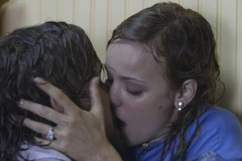