Meagan Camper, Pete Wentz’s longtime girlfriend, posted this photo on Instagram today. The pair is overjoyed at the news, and have taken to social media to share it. Wentz tweeted, “we’re super excited to announce we’re expecting a baby!”
Here’s all you need to know about the 24-year-old who is having a Fall Out Boy or girl.

The couple started dating in the fall of 2011, coinciding with his divorce from Ashlee Simpson.
He told Us Weekly that Camper is way too good for him.

It’s insane that she hangs out with me!” he said of his girlfriend. I feel like [we look like] ‘hot girl pictured with homeless man trying to beg her for change.’ This is like charity work here.

Wentz’s divorce from Simpson was finalized in November of 2011. With Simpson, he has a five-year-old son named Bronx Mowgli. On January 13, Simpson announced her own engagement– to Diana Ross’ son, Evan.

She is represented by Two Management.
She tweeted the key to maintaining her slim figure.

I work out everyday so I can eat pizza everyday :/

3. She Supposedly Had a Miscarriage

Radar.com reported that Meagan’s grandmother, Sherrilyn Camper, told Star about the miscarriage, which occurred during Christmas.

In December of 2011, rumors spread that Camper was with child. Wentz had to dispel the myth to Us Weekly, saying she was “absolutely not” pregnant.

4. Her First Public Date with Wentz Was in New York City

According to the Daily Mail, the couple took Bronx to the park in New York City, where they were first photographed as a couple.

In June of 2013, when Wentz turned 34, the three took a vacation to Miami together.

The Daily Mail reported in October of 2013 that the couple took Bronx on a lunch date, appearing to be a very modern family.

A source told the paper, “Several times Pete reached for Meagan’s hand, so there were times he hand Bronx in one hand and Meagan in the other.”

5. There’s Talk That She Will Marry The Father of Her Child

Wentz told Us Weekly in January about his future plans.

I think so. I mean, we talk about it a lot. I feel really lucky. It’s, like, really interesting [to be] in a relationship with someone who is truly my best friend. Like, I talk to her about everything. She will tell me when I’m being not so insane, and sometimes she’s like, ‘You’re being a little bit insane.’ It’s very helpful. 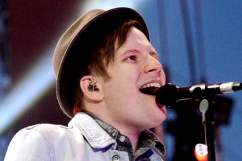