The pro wrestling behemoth who wrestled under several different gimmick names (Mabel, King Mabel, Viscera, Big Daddy Voodoo and Big Daddy V) has passed away. Here’s everything you need to know about the man behind those gimmicks, Mr. Nelson Frazier Jr.

1. He Died of A Heart Attack

Nelson Frazier Jr. reportedly passed away on February 19, 2014 at the age of 43. His cause of death was reported to be a fatal heart attack. Frazier’s Jr.’s agent, Eric Simms, released the official news of the wrestler’s death after contacting Frazier Jr.s current wife. Frazier’s original tag team partner, Robert “Bobby” Lawrence Horne, from the 90’s WWF tag team Men on a Mission also posted about his friend’s passing through his Facebook page.

2. He Just Celebrated His Birthday

3. He Wrestled Under Several Different Monikers in the WWE

Nelson Frazier, Jr. (Viscera) with the Ministry of Darkness.

Frazier Jr.’s wrestling career can be tracked by looking at the many gimmicks he wrestled under. During the early 90’s, he competed as Mabel alongside tag team partner Mo as Men on a Mission. Both men eventually went on to win the WWE Tag Team Championship. In 1995, Frazier won the King of the Ring tournament and changed his name to King Mabel. Going into the late 90’s and early 2000’s, Frazier turned into a darker version of himself as he began wrestling as Viscera. During this period, he became a member of The Undertaker’s Ministry of Darkness and also won the WWE Hardcore Championship. In the mid to late 2000’s, Frazier Jr. began working under the name of Big Daddy V and competed on the WWE ECW brand. Frazier Jr. also made his stays in wrestling on the independent circuit and in Japan (All Japan Pro Wrestling).

Check out the video highlights below to see one of Frazier Jr.’s last contested bouts in Japan:

4. WWE Issued a Statement on His Passing

Frazier’s former employer, the WWE, issued a statement on their former talent’s passing:

WWE is saddened by the news that Nelson Frazier Jr., aka Big Daddy V and Mabel, has passed away. A larger-than-life Superstar, Frazier was a former World Tag Team Champion, Hardcore Champion and the 1995 King of the Ring.

As the dark, formidable Viscera, he was also a member of Undertaker’s faction, The Ministry of Darkness. Frazier’s colorful personality made him a memorable competitor throughout the Attitude Era.

Our deepest condolences go out to Frazier’s family, friends and fans.

Mick Foley also offered up a few words on the big man through his Facebook page:

I was saddened to hear of the passing of Nelson Frazier Jr, better known to most of us as Viscera or Big Daddy V – a nice man, with a big heart and a great look – who left not only a unique legacy in the world of sports entertainment, but a unique mark on my own career, and an indelible memory in the minds of my children.

Although we faced each other only sparingly, I actually sought images of him my home every day for over a year when my children took turns drawing pictures of the fearsome figure, which found homes on the Foley family refrigerator. They Warint scared of him, so much as they were enamored of him – drawn to the contrast of the huge figure they watched on the television set, with the gentle man they saw backstage. My youngest son was terrified of mascots and characters for several years, a fear that actually left him hiding underneath a table at the Magic Kingdom, when Cinderella and her three mouse friends arrived at a character dinner. I tried to talk my little guy out of this illogical fear by reasoning with him.

My son shook his head, no.

“How about The Great Khali”, I said.

Once again, he shook his head no.

“But 3 guys dressed in mouse costumes?”

Good bye Big Vis – you will be missed. 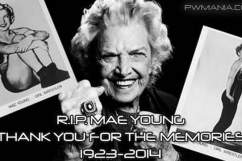