Rachel Frederickson is the winner of The Biggest Loser’s 15th season, taking home $250,000. Have a look at all the facts on the Stillwater, Minnesota native and her giant transformation.

Rachel Frederickson was actually a talented athlete in high school. She was a star swimmer with multiple scholarship opportunities. However, Twincities.com reports that Frederickson decided to follow her heart to Germany, to be with a German exchange student she’d fallen in love with. But, that didn’t work out so well and Frederickson made her way back to the U.S.

2. She Won The Show’s First Triathlon

Frederickson’s time at the ranch was very productive. In fact, Twincities.com writes:

At the ranch, Frederickson worked out with trainer Dolvett Quince and was considered a frontrunner, winning various challenges including curling and bobsled competitions along with the triathlon, where she swam competitively for the first time since high school.

During a phone interview with the news source, Frederickson talked about her triathlon experience:

The triathlon for me was just such a symbolic way to round out my journey on my last week on the ranch … To finish strong and to show myself how much I’ve really grown and how much I’ve found respect for myself. I’ve taken charge and that confident girl is back, that athlete is back.

v3. She Fell Off The Wagon When She Got Home

At first, Frederickson went to Stillwater to exercise, stay on her path, and get help from her very supportive mother. But, when she returned to her home in Los Angeles, she apparently binged and began to gain weight. The holidays were a killer, but she overcame her urges.

4. One of The Jobs She Had Was Running a Mobile Ice Cream Business

With her mother Julie, Frederickson used to run a mobile ice cream business. This was one of her many gigs before becoming a voiceover artist.

5. Her Mother Is Her Biggest Cheerleader

Frederickson has been truly inspiring for many viewers who’ve cheered for her along her weight-loss journey. Nontheless, it’s been her mother Julie who has been there for her every step of the way. Julie told Twincities.com:

I am so proud of her for putting herself out there for the world to see at a time that she was basically hiding … That took a lot of courage. Everything Rachel has accomplished is through hard work and dedication. I am amazed by her but not surprised she has been so successful. She is my hero. 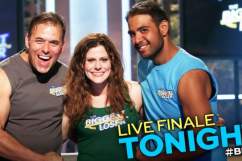 Read More
Facebook, Reality TV, TV, Twitter
The winner of "The Biggest Loser" is the inspirational Rachel Frederickson. Check out all the facts on Frederickson and how she powered through the competition.