Sharleen Joynt has left The Bachelor. After a romantic one-on-one date with Juan Pablo Galavis, Joynt wasn’t convinced that JP was the one for her. So, after JP’s solo date with Nikki Ferrell, Joynt meets him at his hotel room and tells him that her feelings just aren’t strong enough.

Before Joynt even went on her solo date with JP on this episode, she was voicing her need for a real connection. Even as the two shared time together Joynt’s feelings wavered a bit. However, by the end of the date, she was making out with Juan Pablo in the water and seemed to be on board with him. Apparently, this wasn’t the case. Joynt is not convinced that there’s a mental connection with JP.

Now, for those who have been watching The Bachelor since the beginning, you probably saw this coming. From the beginning, Joynt has questioned her feelings for Juan Pablo and has had many doubts. It was only a matter of time …

After being dumped by Joynt, Juan Pablo is very understanding and applauds her honesty, but tells the camera that he wanted to keep her in the competition. As he wipes away his tears, JP says that he has complete respect for Joynt and thinks she is very brave. 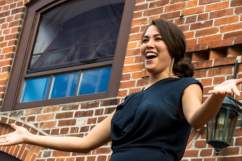 The Bachelor’s Sharleen Joynt: 5 Fast Facts You Need to Know