Come hang out with me (Elton Jones) and the rest of the viewing audience on Twitter as we rant and rave about the mid-season 4 premier episode of The Walking Dead. With the jail in ruins and its survivors forced back out into a world overrun by the undead, things look dire. What else could possibly go wrong?

9 pm: The anticipation has been built up enough for me. LET’S START GETTIN’ DEPRESSED, FOLKS! We all know the folks who escaped their prison home aren’t exactly living the good life anymore.

9:03 pm: Michonne still knows how to handle herself around those annoying zombies. She just replaced her zombie duo with two more brainless bastard.

9:08 pm: Looks and sounds like Carl grew a set. He’s talking back to his Pops and everything.

9:13 pm: Carl’s dropping all types of expletives. The lil’ boy has become a zombie hunting man.

9:21 pm: Michonne and her two former zombies…when they were alive. SHE HAD A SON? Wow…

9:27 pm: Carl’s Pops might finally be down for the count. And by the looks of things, Carl’s not going to last too long without him. His zombie leading skills are gonna get him killed.

9:34 pm: Carl finally lets his real feelings be known about his Pops and his failure to protect everyone and everything. “I’d be fine if you died.” Damn…

If Rick is dead I'm done with the walking dead

9:47 pm: GO HEAD, MICHONNE! She’s losing it, but at least she’s still sane enough to cut up some walkers.

10 pm: Reunited..and it feels so good. Man, I personally can’t wait till next Sunday! Thanks for chilling with me, Walking Dead fans! 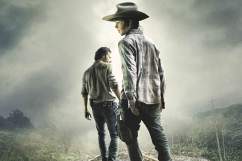