“Warriors…come out and play yay…”

That’s one of the most quotable lines from the 1979 cult hit classic, The Warriors. The gangs of New York at that time, the familiar locales from that bygone era and the insane fight scenes have all contributed to the adoration that this film still receives.

For all those longtime fans of the film, we’re sure this incredible fan made remake trailer will grab you and never let go. A 2014 reboot of The Warriors film not only sounds like a great idea, but it also looks like the movie remake we’ve always wanted. And that feeling is based purely off the video you just viewed above.

Here’s a few words from the executive producer of this awesome trailer, Ram Bhat:

Los Angeles 1992 – The Warriors and every other gang in the city are called to meet in the Valley. Hailing from Compton, Cyrus, the leader of the biggest gang (The Riffs), wants to take over LA and proposes a truce amongst them all. But as events take a turn for the worse, the Warriors have to fight their way back home to Long Beach. WILL THEY SURVIVE THE NIGHT?

Head to the next page to check out some dope poster art for this fan made remake! 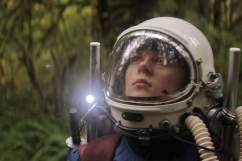