April 4, 2014 is not that far away, but we’re sure you guys are nipping at the heels to see any extended part of this new film. Captain America: The Winter Soldier looks like it’s going to be another Marvel Studios hit, which is why Marvel’s official YouTube channel has released a 4-minute long look into the earliest scenes of the film. Marvel is pretty confident that this film will be a box-office smash, so they’re just giving away some clips.

Enjoy these scene, as Captain America and Black Widow carefully infiltrate an ocean liner that ‘s been taken over by Batroc. Yeah, you read that right. Batroc the Leaper! UFC fighter Georges St-Pierre will be taking on the role of this Marvel villain. 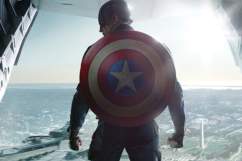