Adam Lambert has been entertaining and shocking America since his 2009 stint on a reality show that made him a household name. He quickly became know for his theatrical voice, black eyeliner, and daring performances.

Now, the star has a TV gig and a new tour with a legendary rock band. Here’s all you need to know about the 32-year-old’s exciting and flourishing career.

1. He First Came on the Scene on ‘American Idol’

In 2009, Lambert was awarded the runner-up prize in the singing competition.

He told HitFix that he was so grateful to perform on the Idol stage:

To me, it’s not about the title of American Idol. It was the experience. I made music. And I got to do a different performance every week and I was able to use ‘American Idol’ as a platform to get myself out there and have a career.

On the reality show, Lambert was credited with the feat of bringing theatricality back to the program. He told HitFix about that concept:

First and foremost, it is about the music, but it kind of packages it in a little bit more of a flashy, more interesting, dynamic way, in my opinion. I think theatricality is just one way of performing and I don’t think it’s a better way or The Way, but it’s my way.

Simon Cowell once dismissed Lambert, saying, “I think you are theatrical and therefore not current.”

Lambert told Yahoo that he ignored Cowell’s negativity, and said:

And then there was another part of me that wanted to argue with him because ‘theatrical’ – especially at that time – was becoming very trendy. We had artists like Katy Perry and Lady Gaga breaking into the scene who were incredibly theatrical. But I was prepared to sit there and argue with him

Lambert came out in Rolling Stone magazine in 2009.

In the interview, he said, “I don’t think it should be a surprise for anyone to hear that I’m gay.”

He also dished about the fact that he waited until after the Idol finale to reveal his sexuality:

Right after the finale, I almost started talking about it to the reporters, but I thought, ‘I’m going to wait for Rolling Stone, that will be cooler.

In an interview with 20/20 he spoke of his decision:

I wanted the focus to be on my ability as a singer and as an entertainer — not on my private life. So I chose to kind of ignore the issue until after the voting ended.

In the same interview, he also announced that he is not opposed to kissing girls:

I’ve been known to make out with girls from time to time. Couple drinks involved, you know. It’s fun. And who knows? Maybe it’ll go further someday. I don’t know.

He is obviously open with his sexuality and told Yahoo that he wants to be sexually forward with his music as well:

I think [sexuality] has always been prevalent [in music], but we’re in a different time now and we can say more now. With the information age being what it is, everything is literal. Everything has to be spelled out. We tweet everything and we text everything; everything is put into words. So nuance is kind of a dying thing.

«@LaReinaDeLaCoca Wait Adam Lambert Is Gay» WHAT!!! But he hides it so well… pic.twitter.com/XmIS9RCndG

During the iconic band’s first tour in eight years, Lambert will be honored with the role of a lifetime as the band’s frontman. Queen’s original frontman, Freddie Mercury, died in 1991 after a battle with AIDS.

Lambert gushed about his newest job on Good Morning America, saying, “Queen is one of the quintessential rock bands of all time…they’ve influenced bands for years to come.”

This is not the first time the Idol alum performed with the band.

They rocked out together at the 2011 MTV European Music Awards and multiple concerts in Europe in 2012.

USA Today reported that Lambert expressed his gratitude in a press release:

I’m completely in awe of the Queen phenomenon,” Lambert says in a press release. “The thought of sharing the stage for a full set in North America is so beautifully surreal. I’m honored to be able to pay my respects to Freddie’s memory; he’s a personal hero of mine, and I am deeply grateful for the chance to sing such powerful music for fans of this legendary band.

4. He Has a Recurring Role on ‘Glee’ as a Rocker

His first appearance as NYU student Elliott Gilbert aka “Starchild” was on a November 2013 episode.

His mind-blowing rendition of Lady Gaga’s “Marry the Night” started his long-running role on the show.

He performed the song on the episode “A Katy or A Gaga,” and told Ryan Seacrest about the experience:

It’s such a good episode. I’ve had such a good time with everybody. The cast, they’re a big family and they’re super tight-knit and have a bunch of inside jokes, but they welcomed me with open arms.

The rocker also dished to Seacrest that he was once rejected from the musical TV series when he auditioned before Idol made him famous:

[I’m] not bitter at all. I think things worked out great, [but] the guy told me I was too old and truth is, I probably just sucked. I don’t think I was good enough.

5. His Risque Escapade on the AMAs Caused a Stir

At the 2009 American Music Awards, Lambert sang his single, “For Your Entertainment,” off his debut album of the same name.

His sexually charged performance broke some boundaries according to some viewers.

According to Rolling Stone, it included “simulated oral sex from a male backup dancer and a brief make-out session with his male keyboardist.”

Dancers were outfitted in S&M gear, attached by harnesses, and Lambert felt up the legs of both men and women on stage.

ABC producers claimed they weren’t informed about the guy-on-guy kiss in advance. In fact, when the show was broadcast on the West Coast, the infamous kiss was removed.

In an interview with a CNN, Lambert said the comments are “a form of discrimination and a double standard” since “women performers have been pushing the envelope” for decades. 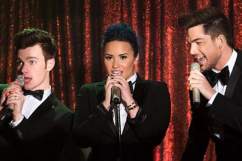