Teen superstar Cody Simpson is one of the cast members on Dancing With The Stars 2014. Check out all the facts on the adorable Aussie.

1. Witney Carson Has Been Paired With Simpson on DWTS

Simpson has been paired up with new pro Witney Carson on Dancing With the Stars. On the premiere episode of the season, Carson seemed very interested in Simpson and asked him right away if he had a girlfriend, which he does. Carson also talked about how she in definitely single and seemed to be a bit flirty. Simpson was very respectful, but did admit that Carson’s moves can be “distracting.” As Simpson’s girlfriend watched and cheered from the front row, host Erin Andrews drilled the couple with awkward questions about their chemistry together. Hopefully, Andrews lets up on Simpson so he can keep the relationship with his girlfriend a healthy one. 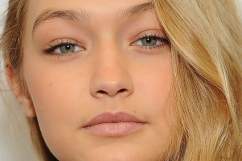 Simpson has been in a relationship with Real Housewives of Beverly Hills star Yolanda Foster since 2013. Hadid resides in New York City and is a successful model. She’s been seen in campaigns for Guess and has most recently been named one of the 2014 rookies for Sports Illustrated Swimsuit.

Simpson is an Australian pop singer who has stolen the hearts of girls all over the world. Check out his latest single “Surfboard” in the above Instagram rehearsal video. The caption from the video reads:

Rehearsing #SURFBOARD to perform for the very first time at Key Arena in Seattle for #WeDay. get funky

Much to the sadness of girls who are watching Simpson on DWTS, Simpson had said that he won’t be going shirtless for any of his dances … Cross your fingers he changes his mind.

4. Simpson Is Actually an Award-Winning Swimmer

love your music.I listen to some of it before my swim meets. it helps.☺️I did not know you were a swimmer.your very talented @CodySimpson

5. Cody Simpson Got Majorly Slimed at the 2014 Kids Choice Awards

Cody Simpson, along with fellow teen heartthrob Austin Mahone, got seriously slimed at the 2014 Kids Choice Awards this past Sunday. Check out the hilarious clip in the below link: 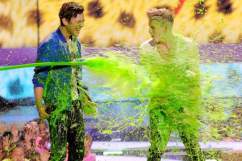 WATCH: Cody Simpson and Austin Mahone Get Slimed at the Kids Choice Awards