Emma Watson and Douglas Booth are rocking the boat in Noah, out in theaters on March 28.

Their passionate scenes in the trailer have caused a stir among Hollywood critics, who feel the film strays from its Biblical roots.

The actors are undaunted by their critics, with Watson telling the Christian Post, “It’s a very inclusive piece and I think it is very true to the spirit and the themes of the biblical story.”

Booth also defended the production, telling Wonderland about the integrity of the director, Darren Aronofsky: “But everything he did take from it was deadly accurate. The measurements for the ark were exactly the same as it was in the Bible – the exact shape and dimensions. Darren is one of the best filmmakers out there, and it was down to his bizarre imagination and creativity to bring a story like that to life.”

Here’s what you should know about the young power couple behind the movie.

Hollywood is seeing an explosion of talent from across the pond. There are no two better examples than Watson and Booth.

In fact, Booth recently graced the cover of GQ Style with Theo James and George MacKay, dubbed as the “Brit Pack.’

Although his acting career takes him all over the world, Booth, 21, still considers London his favorite city.

When asked about his place of choice, he told Conde Nast Traveller:

London. Not just because it’s home, but because it’s so diverse. I love cities with tales to tell and every little corner of London is interesting. I live near Bermondsey Street, and I never tire of my views of the river.

Of course, Watson, now 23, first came to our attention at 9 years old when she was cast in the very British Harry Potter movie franchise where she played Hermione Grainger.

She chose to leave her home in England to attend college at Brown University in Rhode Island. Her fellow students got a kick out of her accent.

…they just like, just at the very beginning they would pick up on everything I said. You know, I’d say “jumper” and they’d be like “jumper!” and I’d be like (reluctantly) “yes” (laughs). After a while they just got used to it. My best friend Madison keeps a list on her phone of all of the different English slang that I say, so she has kind of like a translator so she can understand without having to ask me, “What on Earth are you talking about when you say ‘nackered’?”

As Shem (Noah’s son) and Ila in Noah, the pair play a passionate couple.

In an interview She Knows did with the couple, Booth said that he got a little too comfortable with his costar:

We were so comfortable. I fell asleep in your lap between takes. I was meant to wake up and say something. I just didn’t wake up.

Their steamy scenes were a little too much for some.

Watson released a second trailer of the religious epic to her 12.4 million Twitter and 19 million Facebook fans, which featured a passionate kiss between her and Booth. “But her sexy liplock with the Romeo & Juliet guy is the least controversial thing about the movie,” said Cambio.com.

Many religious groups believe that Aronofsky has taken on too much of a creative role, altering the story for his Hollywood audiences.

According to Digital Spy, the director made this statement regarding the backlash:

Noah is the least biblical biblical film ever made. I don’t give a f**k about the test scores! My films are outside the scores.

3. Emma Once Asked Douglas Out to Dinner

Whoever put Emma Watson and Douglas Booth in a photo shoot together just wanted my heart to stop pic.twitter.com/y1T0DA0eyu

The photo above shows the friends reunited for a photo shoot and interview for Wonderland magazine, where Watson was the guest editor for their February/March issue.

In that interview, the pair talked about going out to dinner at Watson’s request after they first met.

Oddly, we have the same favorite restaurant in London, and I remember asking him out for dinner and both of us dreaming about what kind of films we wanted to make down the line – not thinking we’d film together only three years later. Weirdly still, Doug bought me a first edition signed copy of the album Just Kids by Patti Smith. Patti ended up working with Doug and I and Darren in Noah – she wrote a lullaby, which is going to be used in the film. She was very present and around on the set, too.

They’re both Burberry models, and, in fact, Watson modeled with Booth on his first-ever shoot.

In her 2009 campaign for the British luxury brand, Booth is standing alongside her.

At 15, Watson was already smitten after meeting Booth, and she admits that her attraction has only grown as time goes on.

There’s something old-mannish about Doug, which he had even then. He knows who he is. He doesn’t get intimidated, doesn’t hold back, and is generally fearless. We met when he was 15 and I remember looking at him and thinking he was offensively attractive. And it’s just gotten worse since then.

Booth has no interest getting accolades based on his looks and said,
“The grittier, the dirtier, the worse I can look, the happier I am. It takes the pressure off.”

During his promotion of Romeo + Juliet, he told Vogue that he’d had enough with talking about his appearance:

But how I look is drawn into every conversation I have with every journalist. I didn’t think about it, Romeo’s not vain – and neither am I. They didn’t have many mirrors in those days.

5. They Both Have Dating Drama

On the set of Great Expectations, Booth met and started dating his co-star, Vanessa Kirby. What made the situation uncomfortable was the fact that in his film Romeo and Juliet, Kirby’s ex, Christian Cooke, played Mercutio to Booth’s Romeo.

When his relationship with Kirby ended in October, Booth famously hung out with Taylor Swift in November of 2013. However, the hookup was short lived because he couldn’t take the fact that she came on too strong.

An insider told the Daily News how Swift tried to woo him:

Taylor kept on making an effort to flirt with Douglas, but he gave her the cold shoulder and was extremely dismissive toward her. “She would get a drink and then approach him; she would chat with [actress] Hailee Steinfeld and then re-approach him; she was even trying to chat him up near the flowers on display. It was all very funny for those of us watching.”

This resulted in at least a few dates for the songstress and the actor.

His friend told the paper that Booth is basking in the single life and does’t want to be tied down:

Doug is a young guy and is enjoying the single life. He was quite taken aback about how keen Taylor was. She has been in touch with him, but he just wants to be friends.

As for Watson, the Mirror recently did a recap of all of her suitors over the years.

In 2011, she started a long relationship with Will Adamowicz, whom she met at Brown University. They parted ways in the summer of 2013.

In January, she was spotted with Oxford University rugby player Matt Janney.

The two seems quite close, and Watson even took him on her press tour for Noah. The lovebirds were photographed at a Madrid restaurant. 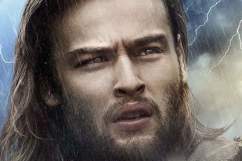 Douglas Booth of ‘Noah’: 5 Fast Facts You Need to Know