The most famous voice in trailers, Hal Douglas, has died at the age of 89, reports The Guardian. Douglas will be forever remembered for his phrase “In a world…”

He died as a result of pancreatic cancer according to his daughter, Sarah, on March 7, at his home in Lovettsville, Virginia. The legendary voice actor is survived by his wife, Ruth, daughter Sarah, and two sons from a previous marriage, Jeremy and Jon.

2. Douglas Had a Monopoly on Movie Trailers

He, along with two other voice over artists, Don LaFontaine and Don Morrow, monopolized the movie trailer industry for most of the 20th century. It is not known if he or Don LaFontaine was the originator of the phrase “In a world…”

3. He Was Highly Aware of How Famous His Voice Was

Of his fame, Douglas said, “The fact is, my voice has been out there. And it hangs out there. You sit down in the theater and sometimes in three out of four trailers I’d be on them.”

Douglas was born Harold Cone in Stamford, Connecticut, in 1924. He was a U.S. Navy pilot vet, serving in World War II. Taking advantage of the G.I. bill, Douglas enrolled at the University of Miami’s acting program following the war. His first voice acting work came when he relocated to New York City in the late-1940s.

One of his only known on-screen appearances came in Jerry Seinfeld’s 2002 documentary, Comedian. His clip in the movie has been viewed on YouTube 70,000 times. 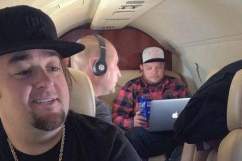 Austin Russell, ‘Chumlee’ Is Not Dead: Here’s Your Proof

Read More
5 Fast Facts, Breaking News, Celebrities, Deaths, Movies
His famous voice was heard on trailers for movies such as a "Forrest Gump" and "Lethal Weapon."