Everyone knows Dwayne “The Rock” Johnson” for two reasons – his awesome wrestling career and his starring roles in several great action flicks. In 2014, Dwayne will morph into the heroic Greek demigod we all love to see kick some ass – Hercules. We’ve been treated to pictures of what’s been going down on the set of this film, but now we actually get to see some moving imagery of this upcoming 2014 action/adventure film. 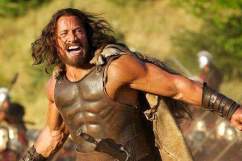 PHOTO: First Look at Dwayne ‘The Rock’ Johnson as Hercules